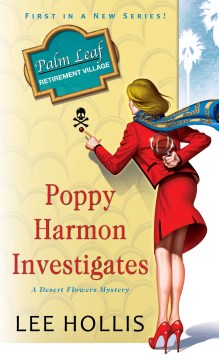 Poppy Harmon is devastated when she learns she is penniless after the death of her husband, who gambled away their savings. With few employable skills, the former actress, who once played a detective's secretary on television and helped craft the show's scripts, becomes a licensed PI in California, horrifying her daughter. Teaming up with her best friends, Iris and Violet, Poppy launches the Desert Flowers Detective Agency. Unfortunately, no one will hire the sixtysomething sleuths until Poppy has the idea of using her daughter Heather's actor boyfriend, Matt, as the face of their agency. Singer Shirley Fox, who lives in the Palm Leaf Retirement Village, soon hires the firm to find her stolen jewelry, and the women go undercover to chat up the residents, with Matt, who badly wants to participate, getting in the way. A murder soon complicates matters. The theatrical frame, combined with a set of quirky characters, including a 12-year-old computer whiz, and plenty of humor, distinguishes this delightful cozy, the first in a projected series. Copyright 2018 Booklist Reviews.

When Chester, Poppy Harmon's fourth husband, dies, the retired actress is stunned to learn he left her penniless. With no practical skills but having once assisted a private investigator-turned-screenwriter with plot ideas, Poppy earns her California license and with best friends Iris and Violet opens the Desert Flowers Detective Agency. No one wants to hire three 60-year-old women as PIs—until they put an actor's face on the website. Actor Matt dates Poppy's daughter, but he wants to be more than the face of the agency and becomes "Matt Flowers," detective. When an aging actress hires the team to investigate a theft of her jewelry at the Palm Leaf Retirement Village, it seems as if they can handle the case. Then, Poppy finds the body of the woman's rival, whose tell-all memoir promises scandal. Now they have to find a burglar and a killer. Hollis (), the pen name for screenwriter Rick Copp, whose Hollywood background and knowledge of 1980s television factor into this sometimes amusing mystery, features a trio of likable sleuths in a story with a surprising twist for a cozy. Suggest for readers of J.C. Eaton's "Sophie Kimball" mysteries featuring active seniors.

Retired small-screen actress Poppy Harmon, the heroine of Hollis's hilarious series launch set in California's Coachella Valley, finds herself broke after the death of her conniving husband, who lost his job and all their money gambling without her knowledge. Regular work is not Poppy's strength, so she takes inspiration from her old TV show, , and fakes the requirements for her PI license. With Iris and Violet, two fellow residents of the Palm Leaf Retirement Village, she forms the Desert Flowers Detective Agency. After the ladies fail to attract clients, crafty Poppy enlists her daughter's handsome wannabe-actor boyfriend as the agency's face. Finally, aging actress Shirley Fox hires them to find her stolen jewels, the search for which leads to the uncovering of scandalous secrets and Poppy's entanglement in a murder case. Pop culture references throughout add to the fun, and Hollis () wraps up the mystery with a truly surprising twist. Cozy fans will eagerly await the sequel.

Murder in her stockingMcKevett, G. A.

Getting old is murderLakin, Rita