I'll be gone in the dark : one woman's obsessive search for the Golden State Killer / Michelle McNamara. 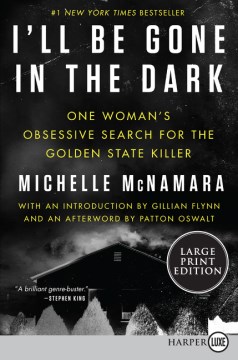 *Starred Review* McNamara's posthumously published book tells both the nightmarish story of the Golden State Killer (GSK) and the neighborhoods he terrorized and her own story of true-crime addiction. Growing up in Oak Park, a Chicago suburb, McNamara became obsessed with unsolved murders after a young woman was murdered in an alley blocks away from her home, and the killer was never found. McNamara's holy grail of killer obsessions came in the form of a serial rapist and murderer responsible for more than 50 sexual assaults and at least 10 murders in California during the 1970s and 1980s. She obtained hundreds of pages of official documents, interviewed those who worked the GSK case then and those who still work it now, and formed her own theories. After she died suddenly in 2016, the book was finished by piecing together her articles, notes, and taped interviews. Though this makes for occasionally disjointed reading, it's a small distraction from McNamara's impressive gifts for language and storytelling. Her work paints a picture of not just a killer but of the towns and lives, including hers, that were irrevocably altered by the horror he inflicted. Gillian Flynn and the author's widower, Patton Oswalt, contribute an introduction and afterword, respectively. Copyright 2018 Booklist Reviews.

This chillingly addictive account traces the crimes of the Golden State Killer (GSK), a prolific serial rapist and murderer who terrorized much of California in the 1970s and 1980s and has never been caught. The number of victims, eye-witness statements, and physical evidence surrounding the GSK is overwhelming. Yet journalist McNamara, who passed away while writing this book, sifts through the information with ease and sensitivity. Interspersed among chapters recounting specific GSK cases are more personal passages, in which McNamara explores her passion for detective work and the online communities whose members dedicate themselves to solving the unsovled. Though hard to put down, this work is a touch uneven, as a few sections were pieced together posthumously from notes and early drafts. Also, in the chapter "Los Angeles, 2012," McNamara draws a tone-deaf analogy between the widespread inaction of neighbors during GSK's spree and her encounter with a "young African American kid," whose "body language was so off" outside of her neighbor's house. That said, the big names attached to the book (Gillian Flynn, Patton Oswalt) will give it great shelf appeal. A haunting, if somewhat patchy, read for fans of true crime. [See "Editors' Spring Picks," 2/1/18, p. 30.]

This posthumous debut recounts the chilling crimes of a serial murderer in California in the 1970s and '80s, alongside the indefatigable investigation of crime writer McNamara to uncover the identity of the killer decades later. When McNamara first started writing about the case on her website in 2011, DNA testing had already linked 10 murders and 50 sexual assaults to one unknown man. The culprit, whom McNamara later gave the moniker "The Golden State Killer," was a serial rapist in San Francisco's East Bay in the mid-1970s, attacking women and girls in their homes. But in 1979, a close encounter with law enforcement led to a change in his M.O., and from that point on no one survived his attacks. McNamara fills in each crime with haunting details ("The suspect began clicking scissors next to blindfolded victims' ears") and tells the story of her own investigation, going as far as to track down and purchase from a vintage store a pair of cuff links that she believed the Golden State Killer stole from a victim. By the time of her sudden death in 2016, McNamara had inspired an online community of sleuths who continue to research the crimes. With its exemplary mix of memoir and reportage, this remarkable book is a modern true crime classic. (Mar.)

Chase darkness with me: how one true-crime writer started solving murdersJensen, Billy

The man from the train: the solving of a century-old serial killer mysteryJames, Bill, 1949-

The fact of a body: a murder and a memoirMarzano-Lesnevich, Alexandria

True crime addict: how I lost myself in the mysterious disappearance of Maura MurrayRenner, James, 1978-

American predator: the hunt for the most meticulous serial killer of the 21st centuryCallahan, Maureen

I will find you: solving killer cases from my life fighting crimeKenda, Joe

People who eat darkness: the true story of a young woman who vanished from the streets of Tokyo and the evil that swallowed her upParry, Richard Lloyd