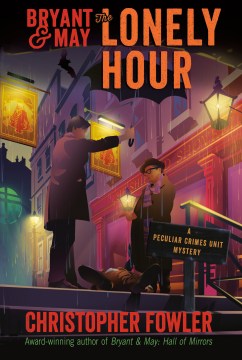 There's nothing funny about murder, much less serial murders, yet readers can count on a few lighthearted, even laugh-out-loud, moments when London's Peculiar Crimes Unit—with senior detectives Arthur Bryant, a dotty oldster whose colleagues would follow him anywhere if only out of curiosity, and John May, the slightly younger straight man of the duo—pursue a case. A man's body has been found hanging upside down from a tree on Hampstead Heath, with a wound in his throat and scattered occult objects around—clearly a case for the PCU, an endangered agency that succeeds somehow while breaking all the rules. Soon after, a man's body with a similar wound is found in the Thames, and, in both cases, the time of death is the lonely hour of four in the morning. The victims are linked only by having been in a shared taxi one early morning months earlier, the PCU staff struggling to find a motive. A significant entry in a series that's as entertaining as it is is eccentric. Copyright 2019 Booklist Reviews.

Sparrow, a young woman, is out seeking rare bats. She sees something odd, but she doesn't know what she saw. The next morning, Arthur Bryant and John May of the Peculiar Crimes Unit are called to the scene of a murder. Why this particular unit? The murder appears to be a witch's ritual, and the mainstream police want nothing to do with it. Another victim is found, although the connection is a matter of argument. The second victim appears to be a suicide to all except Bryant, who has alienated most of his coworkers and superiors, as only an aging professional can. This includes longtime partner May. But he usually has the right thread even if he investigates in eccentric ways. How many more victims will they find? Will Bryant and May be working together at the conclusion of the case? Fowler's 17th installment in the series (following ) has all the idiosyncrasies and dark humor of its predecessors but stands alone well. Perfect for fans of police procedurals with nontraditional, especially older, detectives.

In Fowler's exceptional 17th novel featuring Arthur Bryant and John May of London's Peculiar Crimes Unit (after 2018's ), the PCU investigates a murder committed with a trocar, a surgical instrument normally used to drain body fluids. A man wearing a pig mask, Hugo Blake, used it on Dhruv Cheema, who worked in his family's fashion business. After hanging Cheema upside down in Hampstead Heath, within a circle of objects associated with satanic rituals, Blake stabbed him in the neck. The next night, Blake stabs another man in the neck before throwing his body over a bridge into the Thames. Fowler maintains suspense by alternating between Blake's bloody campaign and the PCU's desperate efforts to stop it by trying to find a connection between the victims. Meanwhile, Bryant and May's decades-old partnership is tested as never before as the two argue fiercely over how to proceed. This whydunit is the epitome of an intelligent page-turner. Agent: Howard Morhaim, Howard Morhaim Literary. (Dec.)