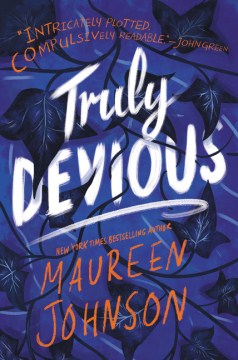 Stevie Bell's deepest wish is to see a dead body. A true-crime aficionado and aspiring detective, she wanted to come to Ellington Academy for one reason: it's the site of one of the most infamous unsolved kidnappings in the world. Founded by the wealthy, generous Albert Ellington, the private school is an academic haven where learning is playful. But in the 1930s, Ellington's wife and young daughter were kidnapped, held for ransom, and then, presumably, murdered; the true perpetrator, who left enigmatic letters signed "Truly, Devious," was never found. Stevie is determined to solve the crime, but her new housemates have secrets of their own, and her wish may come true sooner, and more frighteningly, than she ever wanted it to. Johnson (The Name of the Star, 2011) deftly twists two mysteries together—Stevie's investigation is interspersed with case files and recollections from the Ellington kidnapping—and the result is a suspenseful, attention-grabbing mystery with no clear solution. Invested readers, never fear—this is just the first in a series. HIGH-DEMAND BACKSTORY: The versatile Johnson is no stranger to suspense, and this twisty thriller will leave plenty of readers anxious for more. Copyright 2017 Booklist Reviews.

Aspiring sleuth Stevie Bell has just started her junior year at Ellingham Academy--an artsy Vermont enclave for offbeat students founded in the 1930s by eccentric philanthropist Albert Ellingham--when disaster strikes. One of her new classmates dies under mysterious circumstances in one of the campus's hidden tunnels. The event uncannily evokes a tragedy that took place eighty years earlier when Ellingham's wife and daughter disappeared. While the bodies of his wife and of an unlucky student were discovered later, his daughter was never found. The only clue is a cryptic riddle signed "Truly, Devious." Stevie, an armchair expert in the Ellingham murder, now has two cases to crack. But she's distracted from her mission by her ongoing battle with clinical anxiety and a blossoming attraction to her brooding housemate David, who just may be hiding secrets of his own. Told in alternating chapters that chronicle both Ellingham's past ordeal and Stevie's current detecting, Johnson's finely tuned plot effectively employs classical mystery tropes while maintaining a thoroughly modern sensibility. Stevie's quirky, ragtag bunch of new friends crosses sexuality and class lines, providing teen readers with a wealth of characters to connect with. And if the pacing is a bit leisurely, it's only because Johnson is setting the stage for a planned trilogy. jennifer hubert swan Copyright 2017 Horn Book Magazine Reviews.

Johnson kicks off a riveting mystery series set at the Ellingham Academy, a prestigious school built on a Vermont mountain by industrialist tycoon Albert Ellingham. His goal was to make learning a game—and free—for the exceptional students accepted to the school. But soon after it opened in 1936, Ellingham received a mysterious threat written in rhyme (and signed "Truly, Devious"), Ellingham's wife and daughter were kidnapped, and a student was killed. In the present, 16-year-old Stevie Bell is obsessed with true crime (and often beset by panic attacks), and she feels a bit like a fraud at Ellingham. With Holmesian powers of observation, she hopes to solve the Ellingham case, but the school's deadly past resurfaces when a student from her dorm is killed. Jumping between past and present, Johnson's novel is deliciously atmospheric, with a sprawling cast of complex suspects/potential victims, surprising twists, and a dash of romance. As in her Shades of London books, Johnson remains a master at combining jittery tension with sharp, laugh-out-loud observations. Ages 14–up. Agent: Kate Schafer Testerman, KT Literary. (Jan.)