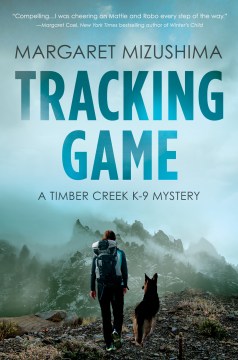 Whether one likes stories about conflict or relationships, there's something for everybody in Mizushima's fine novel. Colorado deputy Mattie Cobb and her boyfriend, Cole Walker, witness a spectacular crime: explosion, fire, murder. Mattie goes to work, but not until the two have anguished over the validity of their love. Both have brutal backgrounds, and their bond still felt fragile.'' Suddenly we're in a lengthy and gripping sequence as Mattie and Robo, her amazing K-9 colleague, lead a horseback search party into the mountains. The author balances stunning nature descriptions with slowly building tension, climaxing in the appearance of something gorgeous and lethal. Finally, the case solved, the narrative flips back to the relationship story. The one thing Mattie wanted "was to feel his arms around her." A bonus is the fascinating account of the dog at work. Watch Robo as he wears his "narcotics detection collar" and "quarters the area," displaying his "passive method of indication." He deserves a novel of his own. Copyright 2019 Booklist Reviews.

Mizushima's fifth "Timber Creek K-9" mystery (after ) begins with Deputy Mattie Cobb at a dance with her beau, Cole, the local veterinarian. An explosion at the edge of town draws them to a burning van belonging to a local outfitter. His body is pulled from the wreck, but it's discovered that he died from gunshot wounds. Mattie and her German shepherd partner, Robo, search the scene and find a glove and the murder weapon. The victim is the son-in-law of a prominent ranching family, and no one has anything bad to say about him. Then a second body is found just outside of Timber Creek. While searching the area, Mattie and Robo have an encounter with an unseen big cat. On the personal front, Mattie is trying to deal with her growing feelings for Cole and memories from her difficult past. She and Robo must work quickly to discover the connection between the two victims as well as the mysterious cage found in the burnt-out van. This is compelling and twisty mystery in a well-described location. Fans of Western mysteries as well as those featuring dogs will enjoy this latest entry in the series.

At the start of Mizushima's middling fifth mystery set in Timber Creek, Colo. (after 2018's ), an explosion rocks the community building where Deputy Mattie Cobb and her boyfriend, veterinarian Cole Walker, are attending the Celebration of Summer dance. When Cole and Mattie investigate, they discover a burning van and a gunshot victim who turns out to be Nate Fletcher, the son-in-law of prominent ranchers. Mattie's German shepherd K-9 partner, Robo, detects traces of cocaine during a sweep of the van, leading Mattie to suspect drug running. When another man is shot and attacked by an animal in the mountains, Mattie fears something more sinister is afoot. Meanwhile, Cole adjusts to single fatherhood, while Mattie struggles to open up to him about her painful past. Mizushima's take on small-town policing feels authentic and series fans will be thrilled to see Cole and Mattie getting closer, but the case, with the exception of a tense horseback search for an exotic animal, lacks excitement. Hopefully, Mizushima will return to form next time.

Among the deadBacklund, J. R.

Any other name: a Longmire mysteryJohnson, Craig, 1961-

Dry bones in the valleyBouman, Tom