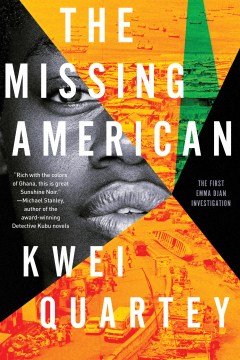 *Starred Review* Fans of Quartey's Darko Dawson series ready for another armchair visit to Ghana will be pleased to meet Emma Djan, introduced here in the same riveting blend of mystery a literary travel guide. After a horrifying #MeToo moment brings an abrupt end to Emma's police career, she is taken on by a private detective agency. Infatuated middle-aged widower Gordon Tilson sends money to a young Ghanaian woman he met online when she tells him her sister has been in a car accident. He then flies off to Ghana to meet her in person, only to find he has fallen prey to an online scam and subsequently finds himself caught up in the deadly world of sakawa, a bizarre underground of con men who believe themselves armed with special spiritual powers bestowed by fetish priests. Tilson's son is concerned when he loses contact and reports the missing American to the police, who do nothing, so he employs Emma's agency. There is an amazing force to be reckoned with behind her veil of politeness, and readers will want to hear more from Emma. Unlike Mma Ramotswe in McCall Smith's celebrated series, Emma experiences violence and encounters dangerous criminals, but, like her Botswana sister, she is driven by a determination to honor her late father and is surrounded by an equally appealing cast of characters. Copyright 2019 Booklist Reviews.

Born in Ghana and raised by an African American mother and a Ghanaian father, Quartey launches a new series following his Darko Dawson mysteries. Again set in Accra, Ghana, it stars 26-year-old Emma Djan, who settles for a job at a private detective agency after realizing that she won't make it as a cop like her dad. Here, a middle-aged widower from Washington, DC, has come to Accra in search of the Ghanaian widow he has met in an online support group, and now he's missing.

In Accra, Ghana's capitol, Emma Djan has wanted to be a homicide detective since she was a small child visiting her father at his police station. Upon entering the police force, she gets stuck in a tedious and unimportant department with no hopes of promotion. She ends up leaving in disgrace to find a more exciting position in a private detective agency. Her first case is steeped in political intrigue—locate Gordon Tilson, a missing American man who was investigating internet scams being run by groups known as boys. Emma must untangle the web of sex, lies, and deceit in the political and police systems in order to find the missing American. Quartey's writing is visceral, with lush descriptions of the scenes as well as his (large) cast of characters. This promising series debut from the acclaimed Quartey ("Darko Dawson" mysteries) introduces the formidable Emma, and most important, the culture and politics of Ghana. Recommended for readers of mystery, African American and African fiction, and international crime/mystery. [See Prepub Alert, 7/8/19.]

At the start of this solid series launch from Quartey (the Darko Dawson series), a sniper assassinates Bernard Evans-Aidoo, a Ghanaian presidential candidate campaigning on an anti-corruption platform. Meanwhile, the hopes of 26-year-old Emma Djan, a detective constable in Accra, to become a homicide detective like her late father are dashed after she resists the advances of the sleazy commissioner of police, who offered her a transfer to the murder squad in return for sex; the commissioner then has her fired on trumped up charges. After doing some other work, Emma leaps at the opportunity to join a PI firm, which involves her in a complex missing person's case. American Gordon Tilson, a lonely widower, was lured to Ghana by Helena, an online scam artist who pretended to be interested in him romantically and accepted thousands from him to pay her sister's supposed medical bills. Soon after Tilson decided to try to seek justice, he disappeared. Quartey keeps readers guessing as to whether and how the political murder is linked to the Tilson case. Readers will welcome Emma into the ranks of capable female detectives.