Light it up / Kekla Magoon. 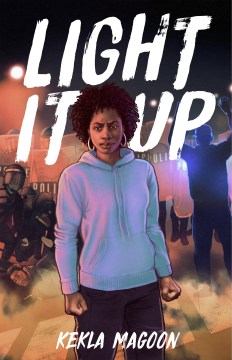 *Starred Review* Magoon's latest novel houses an unapologetic, poignant narrative that forces readers to come face-to-face with the harsh realities of racial violence and racial profiling in America. Shae is a 13-year-old Black girl who leaves school one day and never makes it home. Rather, she is shot and killed by a police officer for doing nothing more than wearing headphones and simply existing, her body left lying in the street for hours. Her senseless death rocks her community and affects the lives of many around her. Following Shae's murder, unrest mounts in her community, and protesters bearing the message that Black Lives Matter clash with white-supremacist demonstrators. This tragic, timely story unfurls in vignettes told from various perspectives of those closest to Shae and her death, including an officer on the scene, Shae's friends, and her sister. Each voice tells of the personal impact wrought by Shae's death, while giving readers a gut-wrenching, viscerally true portrait of the light, hope, and promise that are snuffed out whenever another young Black life is taken by police violence. A powerful story of community bonds, injustice, and finding the strength to fight for what is right, this is less an echo of our times than a clarion call for action. Grades 9-12. Copyright 2019 Booklist Reviews.

In this follow-up to How It Went Down (rev. 11/14), Peach Street is seething. Two years after a young man was gunned down by police on the same street, the neighborhood must grapple with shock, loss, sorrow, and outrage after yet another "officer-involved shooting." Shae Tatum, a thirteen-year-old girl heading home from tutoring, has been shot from behind and killed. Protests erupt as the community seeks accountability and justice. However, the road to justice is riddled with many obstacles, as the voices of individuals from the neighborhood, law enforcement, and the justice system collide in a cacophony of opinions, perspectives, and alternate versions of the truth, as reported in the news and on social media. In a mesmerizing narrative told in a series of character vignettes, Magoon continues to explore systemic injustice and collective trauma while humanizing the people who are directly and deeply affected by them. The vignettes are often searing, heartbreaking, and raw; but tenderness, love, and hope are also prominent themes. Kimberly and Jennica, friends and roommates, navigate a changing relationship; Tyrell (whose best friend Tariq was the one shot and killed two years before), now at college, attempts to leave the sorrows of Peach Street behind; Will tries to make sense of the killings through his art; Brick, the neighborhood kingpin, threatens violence of his own while unexpectedly finding love instead. The masterful interweaving of stories provides a simultaneously intimate and bird's-eye view of a nation that preaches "justice for all" but has yet to fully grant it. Monique Harris November/December 2019 p.90 Copyright 2019 Horn Book Magazine Reviews.

Coretta Scott King Honoree Magoon's stand-alone follow-up to catches up with the residents of the Underhill neighborhood after another incident: a white police officer shoots a 13-year-old black girl, Shae Tatum, in the back as she is heading home. Multiple points of view follow the killing's aftermath through the eyes of Shae's devastated friends and family, the daughter of the officer who shot the girl, the shooting's sole witness, the residents left grieving in the aftermath, and the black man whose PR job burdens him with ensuring the police department comes through the incident unscathed. When the grand jury verdict comes back, the residents of Underhill pull together, emerging stronger and more determined than ever. Not for the faint of heart, this fearless and realistic account of a police shooting challenges readers to think about these all-too-common events from every perspective. The novel doesn't shy away from the ugly and foundational role racism plays in American life, policing, and media coverage, nor does it neglect to examine black America's strength in the face of adversity. Like , this gritty, emotional tale will leave readers gutted and compelled to stand against flawed systems. Ages 14–up. Agent: Ginger Knowlton, Curtis Brown Ltd. (Oct.)

I am Alfonso JonesMedina, Tony

Anger is a giftOshiro, Mark

I'm not dying with you tonightSegal, Gilly