How quickly she disappears / Raymond Fleischmann. 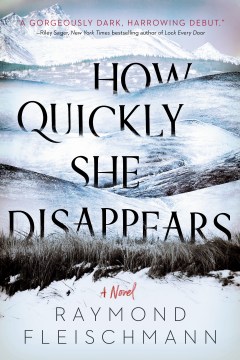 *Starred Review* In this compelling debut, Fleischmann uses remote locations and a barely remembered time as a frame for a story centered on obsession. In 1941, Elizabeth Pfautz still dreams of her identical twin sister, Jacqueline, who disappeared 20 years earlier from their hometown in Pennsylvania when the girls were 11 years old. Now Elizabeth endures a marriage gone sour in isolated Tanacross, Alaska, where her husband, John, teaches for the Bureau of Indian Affairs, and she homeschools their precocious daughter, Margaret. Then one day a substitute pilot, Alfred Seidel, brings the mail, and Elizabeth's life changes. First she's obligated to let Seidel stay in her home's guest room, and then, the next day, he kills her close friend, Athabaskan Mack Sanford, presumably over a card game. When Elizabeth, furious, confronts Seidel in custody, he admits to being involved in taking Jacqueline and offers to reunite the sisters if Elizabeth meets several of his conditions. As the narrative toggles between the present of 1941–42 and the past, shortly before Jacqueline disappeared, Elizabeth is forced to make dreadful choices, leading to a pulse-pounding climax. Fleischmann proves to be an author to watch on the literary-thriller scene. Copyright 2019 Booklist Reviews.

DEBUT In 1941, Elisabeth Pfautz feels trapped by the demands of domestic life—keeping a home and teaching her gifted young daughter; a marriage grown cold and loveless; the remoteness and isolation of the Alaskan wilderness; and, most of all, feeling trapped by the haunting memory of twin sister, Jacqueline, who disappeared 20 years earlier. When a stranger named Alfred comes to town, her friends warn her to stay away, but he convinces Elisabeth to let him sleep in her guest room even though her husband is away. Soon, Alfred is arrested for a terrible crime but tells the police he will only speak to Elisabeth. From his prison cell, he tells her he knows what happened to Jacqueline and will divulge the truth if she completes three tasks. As she falls further into his twisted plot, one thing is clear: she's willing to risk everything, including her family, to find her sister. This promising, if slightly uneven, debut thriller with a strong sense of place will appeal to fans of Jane Harper's , and those who wished Kristin Hannah's was a psychological thriller. [See Prepub Alert, 7/8/19.]

Set in 1941, Fleischmann's uneven debut focuses on Elisabeth Pfautz, who lives in Tanacross, Alaska (pop. 85), and has struggled for years to come to grips with the disappearance of her twin sister, Jacqueline, who was abducted in 1921 at age 11 near their home in Lititz, Pa. Dealing with her husband, to whom she's unhappily married, and their precocious 11-year-old daughter, occupies Elisabeth until the arrival of a stranger, Alfred Seidel, who proceeds to murder one of her friends. To Elisabeth's shock, the incarcerated Seidel asks to talk to her after his arrest. Seidel tells her he knows who took Jacqueline and her current location, but Elisabeth must give him "three gifts" for the information. Elisabeth's desire to find out Jacqueline's abductor's identity and where she might be keeps the tension high, but main characters who don't behave in realistic ways and the distracting usage of second-person point of view for the flashbacks will put off many readers. A disappointing ending caps a novel that works better as an evocation of a certain time and place than a mystery.