Arguing with zombies : economics, politics, and the fight for a better future / Paul Krugman. 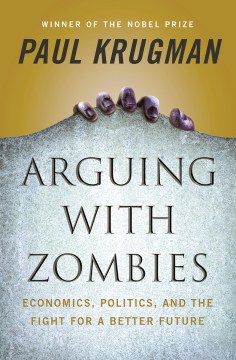 Economist Krugman, a New York Times columnist for two decades, writes from a resolutely liberal perspective. In pieces dating from 2004 and later, sorted by topic, he addresses economic and fiscal aspects of public policy debates. Back when President Bush proposed privatization of Social Security, Krugman thundered against the idea and cheered its defeat. In his commentary about the recession of 2008, Krugman supported President Obama's response to the crisis and laments that the stimulus wasn't huge enough. Explaining Keynesian reasons for adopting such a position, Krugman occasionally alludes to debate within his profession that affects public debate, in one essay addressing national debt and economic growth. Serving as a mediator between professionals and lay people interested in political economy, Krugman extols the Affordable Care Act as well as progressives' proposed policies to alleviate income inequality and climate change. Criticizing by contrast the favorite macroeconomic policy of conservatives, tax cuts (the title's zombies), Krugman will cheer readers who think as he does and appreciate that he supplies them with evidence and intellectual arguments to buttress their outlooks. Copyright 2019 Booklist Reviews.

What's better than having a Nobel Prize winner explain the economics of basic issues like health care, the 2007–08 financial meltdown, and Brexit? And who better than Krugman to go after zombie economics, e.g., misunderstandings about how economics work that just won't die?

In this collection, Nobel Prize-winning economist Krugman presents short essays, mostly written since 2003 as columns for , as well as several longer pieces. He groups the writings in topical sections covering Social Security, tax reform, health care, trade, inequality, politics, the 2008 financial crisis, and other pertinent subjects. Krugman does not shy away from controversy, and considers zombies to be people who cannot accept that their ideas are factually wrong. In one essay on Social Security, he calls out the Bush Administration for lying about the benefits of privatization. He describes Representative Paul Ryan as the flimflam man, the Trump tax cut as a scam, and Fox News as a Republican propaganda outlet. Though the older essays come across as somewhat dated, they recount the debates of the time, and Krugman updates them with more recent ones along with unifying introductions to each section. His essays before 2004 are included in the 2003 collection . While Krugman's rousing, jargon-free writings will please progressive readers, they will be disconcerting to many conservative ones. An informative and controversial study combining business and political science.

Nobel Prize–winning economist and liberal pundit Krugman () attacks conservatives' policies—and morals—in these smart, tough essays. Selecting from his column and other writings, Krugman covers 15 years of "zombie ideas" that "keep shambling along, eating people's brains" because they serve the interests of the rich. These include George W. Bush's "snake-oil" scheme to privatize Social Security, Republican claims that Obamacare isn't working, and conservative dogma that cutting taxes on the wealthy helps the economy. Krugman occasionally resorts to charts and wonkery to refute such pretenses, but mainly exercises his great talent for translating economics into plain English: "My spending is your income and your spending is my income," he writes in a critique of recessionary budget cuts. "If we both slash spending, both of our incomes fall." Krugman's biting prose impugns character as well as doctrine—the persistence of climate change denial, he asserts, means "Republicans don't just have bad ideas; at this point, they are, necessarily, bad people"—and sometimes lapses into derangement syndrome, as when he characterizes the GOP as "an authoritarian regime in waiting." Progressive partisans will cheer Krugman's plainspoken, bare-knuckled, and persuasive ripostes to conservative orthodoxy.