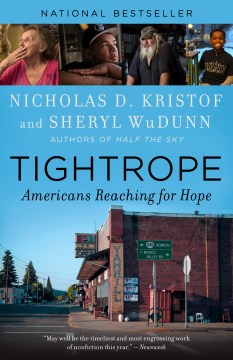 *Starred Review* Life expectancy in the U.S. has decreased for three years in a row (which didn't happen for the previous 100 years); a fact that hits close to home for Pulitzer Prize–winning journalists and husband-and-wife authors Kristof and WuDunn (A Path Appears, 2014; Half the Sky, 2009). In Kristof's farming hometown of Yamhill, Oregon, where his family still has deep ties, a quarter of his former classmates have died early deaths from addiction, suicide, and accidents. The authors set out here to investigate why the U.S. lags behind, sometimes far behind, many other countries in aspects of health, education, safety, and well-being, and why, for many families, things are worse than they were a generation ago. Moving from the micro to the macro, they tell the stories of their Yamhill friends and others they've met across the country, sharing their photos as well as studies and figures that deepen readers' understanding. While they cover policy failures of the last half-century, they also affirm that we're no longer dealing in Republican or Democratic issues, but issues of Americans' very survival. Highlighting successful small-scale programs like Tulsa's rehabilitative Women in Recovery program, they emphasize that there are potentially nationwide solutions. Both researched and personal, this will be hard for readers to stop thinking about.HIGH-DEMAND BACKSTORY: Best-selling Kristof and WuDunn dig into crucial issues facing Americans in a book that will instigate lots of media discussion. Copyright 2019 Booklist Reviews.

Pulitzer Prize winners Kristof and WuDunn, authors of best-selling works like , here look at the hardships confronting working-class America today. One core story: In Kristof's Oregon hometown, a quarter of the kids on his old school bus route are now dead from drugs, alcohol, suicide, or reckless accidents even as blue-collar jobs fade away.

The authors, a Pulitzer Prize-winning husband-and-wife journalist team (), turn their attention to America's overlooked and left-behind working class. With compassion and empathy, they pull readers into the lives of families who have been in a downward spiral for several generations. Stories about Kristof's former classmates and neighbors in his hometown of Yamhill, OR, are stark and troubling, but the authors balance them with other stories about organizations that have been effective and which have made Herculean efforts to turn lives around or mitigate despair. Kristof and WuDunn note that their goal is not to propose policy, but rather to share illustrative stories in order to make clear the enormity of the problem. They bring a human face to issues such as drug addiction, incarceration, family dysfunction, and declining prospects for employment. By comparing America's policies to those of other wealthy nations, they show that solutions are available for "escalators" out of poverty. They also offer ten ways readers can personally make a difference. (A companion PBS documentary is planned.) Enlightening for all concerned Americans, but especially for those interested in social justice issues.

Husband and wife journalists Kristof and WuDunn () turn a compassionate lens on the failed state of working-class American communities in this stark, fluidly written portrait. In profiling residents of Baltimore, Md., and Pine Bluff, Ark., as well as Kristof's classmates from rural Yamhill, Ore., the authors seek to counteract the "cruel narrative that working-class struggle is about bad choices, laziness, and vices." They urge readers to reflect not only on "individual irresponsibility" but on the "collective irresponsibility" of American society, especially in comparison to other first-world countries where the social safety net is stronger. The authors highlight the successes of local nonprofits, including a Pine Bluff after-school program, but contend that pockets of individual charity cannot solve the nation's systemic problems. Threaded throughout are policy suggestions emphasizing the importance of early childhood education, universal health coverage, fair tax rates, commonsense drug policy, affordable housing, and strong worker protections. Kristof and WuDunn avoid pity while creating empathy for their subjects, and effectively advocate for a "morality of grace" to which readers should hold policy makers accountable. This essential, clear-eyed account provides worthy solutions to some of America's most complex socioeconomic problems.

Maid: hard work, low pay, and a mother's will to surviveLand, Stephanie