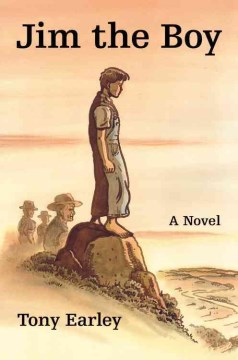 It's 1934, and Jim Glass is just turning 10. Aliceville, North Carolina, where Jim lives with his mother and three uncles, doesn't seem too affected by the Great Depression. But it might just be that life in this little southern town has always been hard. Jim's father, born and raised in the mountains, died a week before the boy was born. So it's only through his uncles' stories that Jim knows him. Like a winding stream, Jim wanders through his tenth year, playing baseball against the mountain boys; climbing a greased pole at the fair; being teased by his uncles; making friends with a rival. This is a deceptively gentle, nostalgic look at childhood during an era when life was by turns harsh and hopeful. Jim is a real boy who can be selfish and stubborn and then determined and giving. Earley offers an understated, poetic tribute to those families whose pride in and love for one another helped them face hard times. ((Reviewed May 1, 2000))Copyright 2000 Booklist Reviews

Set in the 1930s, this very appealing first novel is full of genuine emotional warmth. Ten-year-old Jim, the "boy" of the title, has lost his father to a heart attack and is being raised by his mother and three uncles in a rural farming community in North Carolina. Jim is just beginning to understand the world of adults, and Earley captures his sense of discovery with great poignancy and understated elegance. The pleasures in Jim's life are simple: getting a new baseball, driving with his uncles to see the Atlantic Ocean, and making a friend at school. The central focus of the novel is the love that binds together members of this atypical family and the quietly affectionate way in which they interact. This is a story about gentle, honorable people and the inspiring strength of their family, and Earley tells it with compelling simplicity and beauty. Enthusiastically recommended for all libraries. Patrick Sullivan, Manchester Community Coll., CT Copyright 2000 Cahners Business Information.

Simple, resonant sentences and a wealth of honest feeling propel this tracing of a 10-year-old boy's coming of age in Aliceville, N.C., in the 1930s. Earley's debut novel (after his well-received collection Here We Are in Paradise) carries us, in charmingly ungangly fashion, toward its moving, final epiphanies. Quizzical, innocent Jim Glass lives on a farm with his widowed mother and three uncles, who provide companionship for the boy and offer casual wisdom on life's travails. Jim's father's sudden death at age 23 left a wake of tenderness as his legacy, so much so that Jim's mother still feels married even after his death. However, she will never speak to her father-in-law, who has spent some time in jail and is a despicable loner with a rumored penchant for illegally distilled whiskey. The stormy background Earley provides makes Jim's openness and naïveté all the more haunting. The narrative develops as a series of loosely related, moving anecdotes: the tragic story behind Aliceville's name, a trip with an uncle to buy a horse that becomes a lesson in the transience of corporeal life, a race up a greased pole at a carnival that casts a new light on Jim's bonds with another boy, Jim's best friend's struggle with polio, Jim's mother's resistance to a suitor, and the introduction of electricity to Aliceville on Christmas Eve. In roundabout fashion, and in simple, often poetic prose, Earley brings his protagonist to knowledge of his identity. The dramatic and entrancing growth of this wisdom may strike some readers as overly sentimental. Nevertheless, the closure the book achieves is solid and well-earned. 7-city author tour. (June) Copyright 2000 Cahners Business Information.

In the family wayHays, Tommy

The well and the minePhillips, Gin

The edge of townGarlock, Dorothy

Where the heart wasBoyer, Glenn G.