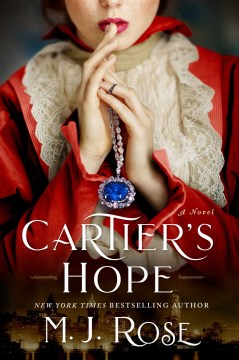 In 1910, Vera Garland is trying to carve out a life for herself as a journalist, which is a pretty steep challenge in a field that is almost entirely dominated by men. But Vera is determined, and when she finds herself a big story—the new owner of the famed Hope Diamond, Pierre Cartier, appears to be playing some suspicious financial games—she won't let prejudice or sexual stereotypes stand in her way. Of course, Vera didn't expect that she would wind up embroiled in something even darker and, perhaps, deadlier. Matters are further complicated when she turns to a Russian jeweler for help and begins to fall in love with him, only to find that he has his own agenda. Rose has a string of popular novels to her credit, and this one is sure to appeal not only to her fans, but also to readers who enjoy a solidly plotted, engagingly written thriller set against a vibrant historical backdrop. Copyright 2019 Booklist Reviews.

Ten months after her father's death, retail heiress Vera Garland accidentally learns his secret and that the death of his lover, her uncle, was suicide to protect her father's reputation when he's outed by an unscrupulous newspaper owner. Vowing vengeance to make this monster pay for what he did to her family, she takes on an alter ego, investigative reporter Vee Swann. She pitches a story she knows this ruthless man will salivate over, involving the jeweler Mr. Cartier, his cursed Hope Diamond, and the marketing practices he's using to sell it. Rose's () latest stand-alone is a Gilded Age gem highlighting social injustices and an ahead-of-her-time woman's resolve to make a difference, set in the gritty and glittering splendor of early 20th-century New York. The Nelly Bly-esque, avant-garde Vera/Vee fights for the underdog in her incognito professional life and is a nonconformist in her society role. Rose's elegant narrative and timely dialog express her characters' humanity and inhumanities, while her research and attention to every detail occasionally make it difficult to separate facts from fiction. A must-read for lovers of atmospheric historical fiction heavy with facts, as well as fans of strong female protagonists, the prolific author, and Lauren Willig.

A reporter seeks to uncover the secrets of the Hope Diamond in the vivid latest from Rose (). In 1910 New York, heiress Vera Garland works as a reporter using the pen name of Vee Swann so that she can dredge up secrets of New York's high society for her gossip column, "Silk, Satin and Scandals." When Vera finds a letter addressed to her recently deceased father, she discovers that he and his male lover were being blackmailed by the owner and editor of another paper, Thelonious Oxley, who threatened to disclose their affair if her father's lover would not pay for ads in Oxley's publication. Vera believes that he will again resort to blackmail. After visiting Cartier's store and learning about how the Hope Diamond has a history of bringing bad luck to those who touched it, Vera devises a scheme: she will agree to write a story for Oxley about how jeweler Pierre Cartier has used fictitious legends to increase the value of the diamond, and then write an exposé on Oxley's expected blackmail of Cartier to suppress her story. At Cartier's, Vera also meets and is charmed by Jacob Asher, a Russian jeweler. As Vera falls under Jacob's spell, she starts to feel guilty about using him to get information for her story. Vera must determine whether her quest to avenge her father is worth destroying her budding relationship with Jacob. The narrative cleverly explores highlights of early 20-century history and heaps on plenty of intrigue. Rose irresistibly combines elements of mystery, romance, and historical events in this memorable novel.