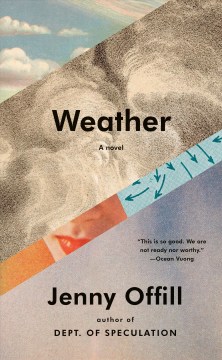 *Starred Review* Ofill follows her best-selling previous novel, Dept. of Speculation (2014), with another crisply revelatory portrait of a marriage and family in flux. Narrator Lizzie is a "feral" university librarian, lacking the degree yet possessing the requisite inquiring intelligence and forbearing sense of humor. Her husband is a classics scholar turned educational video game designer, and their young son is sweetly comic and precocious. Lizzie also tends to her neurotic brother, whose battle against drug addiction is ongoing, and her fixed-income mother. Enter Lizzie's college mentor, Sylvia, who cajoles her into accepting a side gig handling the end-times-lunatic messages from the increasingly vociferous audience for Sylvia's controversially bleak podcast, Hell and High Water. Climate change, pollution, toxic politics surrounding the 2016 election, rich people and their "doomsteads" and working-class preppers, and disaster psychology all preoccupy Lizzie in addition to the relentless everyday clamor and madness. She finds refuge in composing rueful, mordantly funny, razor-sharp journal entries, documenting moments ludicrous, frightening, and tender. She muses, "I have to be careful. My heart is prodigal." Offill, who will delight fans of Lydia Davis and Joy Williams, performs breathtaking emotional and social distillation in this pithy and stealthily resonant tale of a woman trying to keep others, and herself, from "tipping into the abyss." Copyright 2019 Booklist Reviews.

Following the best-booked and , a finalist for the Los Angeles Times First Book Award, Offill introduces us to Lizzie Benson, a librarian (though not by the traditional route) who's barely able to spend time with her husband and son as she fusses over her devout mother and addict brother. An old mentor wants Lizzie to help her answer mail she's been receiving in response to her podcast , and eventually Lizzie must look to the larger world and recognize that she can't save everyone—though she keeps trying.

A librarian becomes increasingly obsessed with doomsday preparations in Offill's excellently sardonic third novel (following ). Lizzie, a university librarian working in Brooklyn, already feels overwhelmed with guiding her son, Eli, through New York City's crowded elementary school system without the extra strain of dealing with her addict brother's constant crises. Mostly happily married to a computer game designer, Lizzie introduces anxiety into her marriage when she takes a second job answering emails for a former mentor who is now the host of a popular podcast about futurism. Fielding questions from both apocalypse truthers and preppers for the coming climate-induced "scarcity," Lizzies becomes convinced that doomsday is approaching. Her scattered, frenzied voice is studded with arresting flourishes, as when she describes releasing a fly: "Quiet in the cup. Hard to believe that isn't joy, the way it flies away when I fling it out the window." Set against the backdrop of Lizzie's trips to meditation classes, debates with a taxi driver, the 2016 presidential election, and constant attempts to avoid a haughty parent at Eli's school, Lizzie's apocalyptic worries are bittersweet, but also always wry and wise. Offill offers an acerbic observer with a wide-ranging mind in this marvelous novel.

All we ever wantedGiffin, Emily

When the lights go outKubica, Mary