Intersection allies : we make room for all / by Chelsea Johnson, LaToya Council, and Carolyn Choi ; illustrations by Ashley Seil Smith. 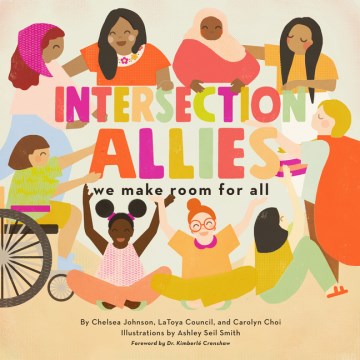 The concept of intersectionality, widely known in academia but less so in children's literature, is here broken down with ease and clarity. The premise—defined in the back matter—is that our identities are comprised of a multitude of parts, all of which influence our perspectives and life experiences. Some parts come with privilege and others with marginalization, but they all can coexist. By describing their own backgrounds, nine different characters show us that not only do aspects of our identities intersect but our lives do as well. Privilege can be used to connect with and make room for others, thus someone with English-language skills can translate for another, and a gender-fluid person has something in common with a girl who wears a hijab, and so on. Cheerful, vibrant illustrations depict a diverse population standing together in solidarity, be it on the playing field, in a gender-neutral bathroom, or at a protest rally. A preface by Dr. Kimberlé Crenshaw and endnotes provide additional information. Grades 2-5. Copyright 2019 Booklist Reviews.

With a foreword by civil rights advocate Kimberlé Crenshaw, who coined the term , this celebration of solidarity, allyship, and community is spoken in the voices of children of varying backgrounds, abilities, and identities. Paper cutout–style images in bright colors show the children in empowering moments, described in upbeat, rhyming verse. Alejandra uses "a chair, but it doesn't define me/ Instead, it allows me to zzzip/ glide/ and/ play." A child called Kate, whose "friends defend my choices and place," prefers a red cape to "skirts and frills." Gloria, who speaks Spanish and English, describes herself as "a daughter, a partner, and an entrepreneur," and Heejung, born in Seoul, helps her mother by "translating for her one word to another." Spreads show allies helping each other in daily life, asserting their individuality, and standing together during protests, while repeating text urges readers to "make room for all." Back matter and a discussion guide invite readers to learn more about intersectionality as a framework for understanding themselves, their peers, and their broader communities. A welcoming resource for conversations about equality and social justice that shows readers how identities are made up of myriad influences. Ages 6–12. (July)