The knockout queen / by Rufi Thorpe. 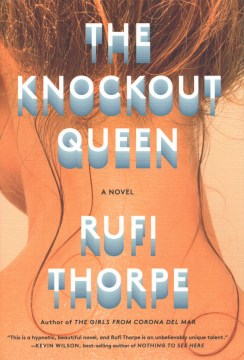 Michael and Bunny were next-door neighbors before they became friends: he lived in a rundown stucco cottage with his aunt and cousin, while she lived in a mansion with her rich alcoholic father. Bunny is one of the tallest students in their grade and hopes to play volleyball in the Olympics someday. Michael, with his long hair and eyeliner, tries to learn more about himself and his sexuality by secretly meeting other men through Craigslist. Bunny and Michael's friendship begins in tenth grade after she catches him smoking in her yard, and they become fiercely close. Michael's sexuality becomes the hot topic of the malicious gossip at school when he starts dating an older man, spurring Bunny to make a violent choice that alters their futures forever. Thorpe, author of Dear Fang, With Love (2016) and The Girls from Corona Del Mar (2014), writes with savage poignancy as she explores identity, adolescent friendship, and the insatiable longing for intimacy. Her novel is devastatingly honest, her characters vulnerable, and her readers will be spellbound. Copyright 2020 Booklist Reviews.

When his mother is sent to prison for stabbing his abusive father, Michael, 11, is sent to live with his Aunt DeeDee. Next-door neighbor Bunny Lampert is the rich princess of North Shore. She lost her mother in a car accident, and her father is an alcoholic and crooked real estate developer. During high school, the athletic girl who wants for nothing and closeted gay boy who lives a frugal life become best friends, finding common ground in a lack of adult supervision and painful home lives in the California suburbs. As Bunny grows taller and focuses on volleyball and a dream of Olympic greatness, Michael meets up with men from Craigslist and begins a part-time job. An act of violent loyalty to Michael, who is bullied, throws Bunny into a legal battle she and her father are unprepared to fight. The resulting violence forces Michael to change his life and focus on his future. Thorpe's () coming-of-age tale set against a backdrop filled with hate and violence will captivate readers with its brutal honesty and unbreakable bonds of friendship. Recommended for fans of Emma Straub and Jami Attenberg.

Thorpe's fierce third novel (after ) observes the development of and challenges to an intense friendship between two outcasts at a Southern California high school in the early 2010s. Michael, gay and closeted, has lived in a shabby house with his aunt and cousin since he was 11, when his mother was sent to prison for nonfatally stabbing his father. In the mansion next door lives Bunny Lambert, an immature volleyball star who desperately wants a boyfriend and, at 6‘3" at the end of her junior year, fears she is a "complete monster." While Bunny copes with an alcoholic father and bullying by her classmates, Michael hooks up with guys he meets online. Neighbors and classmates since middle school, Bunny and Michael don't meet until 10th grade, and their friendship develops as Bunny explores her "girliness" around Michael, while he can "practice being gay." When students start gossiping about Michael, Bunny pummels one of the girls hard enough to cause a critical injury. While the novel's plot is thin and rests perhaps too heavily on the dire consequences of this moment of violence, the two central characters are deeply realized and complex. The result cannily dissects the power and limits of adolescent friendship.

Things we have in commonKavanagh, Tasha