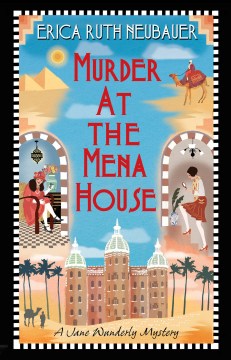 A new sleuth is on the scene, and she starts her career in 1926 Egypt. American Jane Wunderly, a young widow hiding a few secrets, is accompanying her Aunt Millie on the trip of a lifetime. But though the goal is to see the sights, like the Pyramids of Giza, which sit tantalizingly close to her charming hotel, Jane is almost immediately restricted to the grounds when she becomes a chief suspect in the murder of a party girl with a few secrets of her own. Fortunately, a dashing banker, known as Mr. Redvers, steps up to help Jane as she tries to clear her name by finding out the identity of the murderer, even as other bodies fall in her path. There's lots to like here. Jane is a feisty heroine, the setting is enticingly depicted, and there are several intriguing subplots. Fans of Agatha Christie will enjoy this homage, and, as the flap copy indicates, Jane will be traveling the world, where she will no doubt encounter more murder and mayhem—along with romance. Copyright 2020 Booklist Reviews.

DEBUT In 1926, American widow Jane Wunderly travels to Egypt, courtesy of her Aunt Millie, where she hopes to enjoy a stay at Mena House, an upscale hotel. Jane plans to visit the pyramids of Giza and to avoid any romantic dalliances while abroad, but things don't turn out that way. For starters, she is confounded by Aunt Millie's odd behavior, suddenly realizing her aunt's personal life is an enigma. Also, she gets off on the wrong foot with the beautiful socialite, Anna Stainton. When Anna is found murdered, Jane is a prime suspect. Fearing arrest, Jane must eliminate a variety of suspects to locate the culprit. The mysterious banker, Mr. Redvers, however, is a man Jane senses is both puzzling and fascinating and is as interested as she is in solving the case. Stunning revelations, romance, adventure, and intrigue abound in this multilayered, delightfully entertaining whodunit. Neubauer's debut dazzles, with a smart plot, remarkable scenery, and skilled execution.

In 1926, American widow Jane Wunderly, the narrator of Neubauer's promising debut, decides to vacation in Egypt with her matchmaking aunt, who's determined to find her a beau. Jane, who appears to be in her 20s, doesn't welcome those efforts, as she's still struggling with the emotional fallout of her marriage to a man who viewed her as a "trophy... to win" and then break. That trauma has led Jane to vow to stand up for herself going forward, and that resolve is soon tested at the Cairo hotel where she and her aunt are staying, Mena House. Fellow guest Anna Stainton, a British colonel's daughter, takes a dislike to Jane. Their public spat makes Jane the focus of the police inquiry after someone shoots Anna to death in her room. To clear her name, Jane sets about investigating on her own, even as she wrestles with feelings of attraction toward a handsome and mysterious stranger, who calls himself Redvers, whom she believes looks "too dangerous" to be the banker he claims to be. Mystery readers who enjoy a heavy dose of romance will be eager for the next installment.

Murder in an English villageEllicott, Jessica