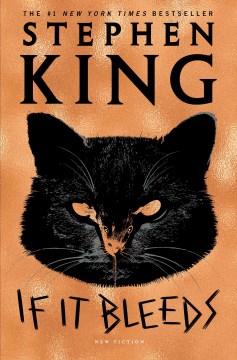 *Starred Review* King received a Bram Stoker Award for his previous collection of novellas, Full Dark No Stars (2010), and here he presents four more original suspenseful and chilling stories. "Mr. Harrigan's Phone" recounts the experiences of a young boy who befriends a reclusive, retired billionaire and introduces him to the wonders of a first generation iPhone with unintended and ominous results. In "Rat," a struggling writer determined to complete his novel holes up in the deep woods of Maine, but things begin to go awry. These two tales are definitive representations of King's accessible writing style, which is filled with nostalgia that makes readers feel good, but which is intertwined with menace that can surge and surprise at any moment. "The Life of Chuck," told in reverse chronological order, is a richly conceived tale of the multitudes of lives within every person. In the title story, "If It Bleeds," King places investigator Holly Gibney from his Bill Hodges novels and The Outsider (2018) on center stage, as she hunts an elusive killer who thrives on the misery and despair of others. This set of novellas is thought-provoking, terrifying, and, at times, outright charming, showcasing King's breadth as a master storyteller.HIGH-DEMAND BACKSTORY: King's love of short fiction makes this a powerful addition to his megapopular oeuvre and fans will be on the hunt. Copyright 2020 Booklist Reviews.

King works well short as well as long—some of his novellas have been the basis of celebrated films, including "The Body" () and "Rita Hayworth and Shawshank Redemption" (). Here are four novellas—"Mr. Harrigan's Phone," "The Life of Chuck," "Rat," and "If It Bleeds"—guaranteed to take you to a dark place. With a million-copy first printing; BISACed as suspense, not horror.

This collection of four novellas by King (; ) is a new outing with old friends, continuing the Bill Hodges and Outsider universe. In "Mr. Harrigan's Phone," eight-year-old Craig, a prodigious reader, is hired to read to Mr. Harrigan. A bond grows between the child and the octogenarian. When his friend dies, Craig mourns the loss and talks to his friend as though he were still alive. What if Mr. Harrigan responds? "The Life of Chuck" has middle school teacher Marty Anderson experiencing a rough day: Traffic is crazy, the likeness of some guy named Chuck is appearing everywhere, and the world is ending. In the title story, Holly Gibney, of the Finders Keepers agency (and Bill Hodges universe), investigates the bombing of a middle school. The fourth story, "Rat," is that of author Drew, who is broadsided by an idea for a novel; all he has to do is get it on paper. His last three novels were never finished. Will he complete this one, and what will it cost him? Longtime readers and new King fans alike will love the fresh tales in this wonderful collection. [See Prepub Alert, 10/28/19.]

The four never-before-published novellas in this collection represent horror master King at his finest, using the weird and uncanny to riff on mortality, the price of creativity, and the unpredictable consequences of material attachments. A teenager discovers that a dead friend's cell phone, which was buried with the body, still communicates from beyond the grave in "Mr. Harrigan's Phone," which reads like a episode infused with an EC Comics vibe. In the profoundly moving "The Life of Chuck," a series of apocalyptic incidents bear out one character's claim that "when a man or a woman dies, a whole world falls to ruin." "Rat" sees a frustrated writer strike a Faustian bargain to complete his novel, and in the title story, private investigator Holly Gibney, the recurring heroine of King's Bill Hodges trilogy and , faces off against a ghoulish television newscaster who vampirically feeds off the anguish he provokes in his audience by covering horrific tragedies. King clearly loves his characters, and the care with which he develops their personalities draws the reader ineluctably into their deeply unsettling experiences. This excellent collection delivers exactly the kind of bravura storytelling King's readers expect.

Growing things and other storiesTremblay, Paul

Wounds: six stories from the border of HellBallingrud, Nathan

Evil intentTaylor, Bernard, 1934-
The devil's ChurnRusch, Kristine Kathryn
City of dreadful night: a tale of horror and the macabre in IndiaSiegel, Lee, 1945-