Up on Bob / words and pictures by Mary Sullivan. 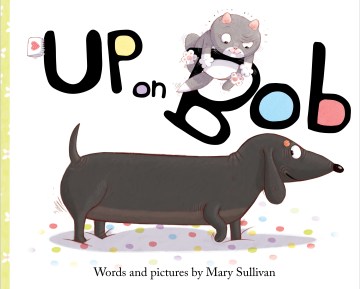 *Starred Review* Sullivan, creator of Geisel Honor Book Ball (2013), returns to canine characters with what should go down as one of 2020's most charming works. A narrator introduces Bob, a deep-brown, short-haired dachshund who enjoys life's simple pleasures. Standing atop a child's bed, Bob sets about his day's work. Visibly determined, he tosses the pillows and dolls, clears the lamp table, and rumples the sheets until, finally, "everything is perfect," and he eases into his day-long nap. Meanwhile, two pointy ears slowly rise behind the bed. "Uh-oh." Bob's face shows that he knows "Someone" is coming—Someone being a mischievous gray cat. As her wily face appears behind a despairing Bob, the narrator urges him, "Pretend you are sleeping," which seems to work, but then—"POUNCE!"—Someone is standing on Bob's back. She sets about her own work, kneading, licking, and curling up with Bob, until, once again, "everything is perfect." Short sentences make this accessible to beginning readers while also humorously reflecting Bob's simple desires. Perfect pacing builds suspense and adds to the hilarity, with most of the storytelling relayed through Bob's shifting expressions. Sullivan has an uncanny ability to capture the details of animal behavior, injecting humanity through facial expressions. She taps into that deep magic invoked by both cats and dogs, and the effects are irresistibly heartwarming. Preschool-Grade 2. Copyright 2019 Booklist Reviews.

Can I be your dog?Cummings, Troy

A cat is betterSingleton, Linda Joy

The gift of nothingMcDonnell, Patrick, 1956-