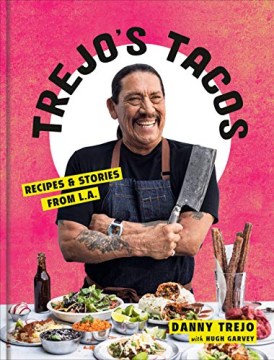 Hollywood heavy, L.A. native, and restauranteur Trejo delivers a bright, robust cookbook that goes far beyond the tacos in its title. Traditional Mexican American foods, such as carnitas, barbacoa, and salsas, are well represented and delectable. Going beyond the conventional, vegetarian and fusion choices like mushroom asada and chicken tikka tacos are plentiful and elevate this collection beyond a celebrity cookbook. Helping cooks make the most of the recipes, a section titled "How to Cook the Trejo Way" provides instruction and guidance with spice, butchering, and equipment basics. Cookbook readers and fans of Trejo will also enjoy the autobiographical vignettes and entertaining food-focused stories told as if they were touring L.A. with Trejo at the wheel of one of his classic cars. Mouth-watering donuts and margaritas round out the journey, and add finishing touches to meals. Trejo successfully translates his food philosophy from his restaurants into this collection of authentic, atypical, delicious recipes that can be easily executed by home chefs. Copyright 2020 Booklist Reviews.

Trejo has ascended from veteran actor to established restaurateur, with Trejo's Tacos and Trejo's Coffee & Donuts becoming must-visit Los Angeles institutions. In this cookbook, he shares 75 of his favorite recipes, from his signature donuts to margaritas, and everything you'd eat in between. For many recipes, he begins with a "master recipe" based on the type of meat featured, which can be repurposed in various ways, including tacos, bowls, and burritos. Vegetarians and vegans should not fret as many of the tacos, entrees, and sauces feature plant-based ingredients. There are even some surprises, like chicken tikka tacos and an entire chapter on "Food That Isn't a Taco." Vivid photographs by Anderson are featured throughout. Also included are autobiographical reflections on the actor's life, along with helpful advice on cooking and ingredient selection. Readers will find Trejo's cookbook, like his acting roles, to be a solid effort which does not hold back nor disappoint.

Instantly recognizable as a menacing bad guy in over 300 films and TV shows, actor Trejo is also an L.A. restaurateur, and here he presents excellent recipes from his Trejo's Tacos restaurants. Trejo begins with advice for stocking a Mexican pantry, then offers traditional recipes based on key ingredients that can be used in tacos, burritos, or rice bowls—including Barbacoa brisket, carne asada (as well as a mushroom version), carnitas, and grilled chicken. For those wanting to expand their taco repertoire, Trejo offers inventive riffs on such fillings as falafel, roasted cauliflower, beer-battered fish, grilled spicy shrimp, and even a chicken tikka. He rounds out the collection with sauces (chipotle shrimp cocktail sauce), sides (cotija and chile mashed potatoes), and desserts (nacho donuts, made with cheddar cheese and poblano chiles), as well as a variety of margaritas. Trejo keeps the sourcing and prep to a minimum while coaxing maximum flavor out of each dish, making the food approachable for home cooks of all abilities. This fiendishly creative collection is a must-have for taco lovers.