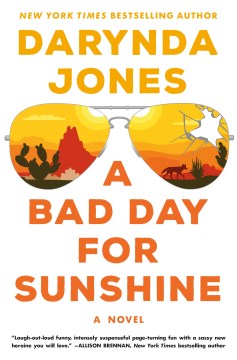 When Detective Sunshine Vicram vowed she'd never return to her hometown, Del Sol, New Mexico, she probably should have made sure her parents were on board, because, 15 years later, they've somehow engineered her victory in a sheriff's election she didn't enter. The move definitely has silver linings, however: her teenage daughter, Auri, is thrilled, and Sun's best friend, Quincey, has signed on as lead deputy. Plus, her new post will definitely benefit her covert investigation into her own kidnapping 15 years ago. Clearly, the universe knows Sun has kidnappers on her mind; her tenure begins with the disappearances of Auri's closest friend and the nephew of Sun's lifelong crush/nemesis, Levi Ravinder. Before she manages to prepare her heart (and her libido), Sun is forced to work alongside Levi, Del Sol's best tracker, while overseeing Auri's grudgingly authorized sleuthing into the teen angles. Fans of Jones' best-selling Charley Davidson series and Janet Evanovich's romps will devour this steamy series launch, which introduces both an irresistible pair of crime-busting Gilmore Girls and a quirky, mysterious setting. Copyright 2020 Booklist Reviews.

In this series launch from the best-selling Jones (), police officer Sunshine Vicram is stunned to realize that a killer is roaming small-town Del Sol, NM, her previous cases having involved at worst the local flasher. She's even more stunned when an FBI agent and a U.S. marshal both drop in to help—and find her broiling hot as Del Sol's infamous sunshine. Even a kidnapped rooster won't waylay this case.

After Sunshine "Sun" Vicram moves back to her hometown of Del Sol, NM, she's elected as the new sheriff in a race she never entered, thanks to her well-meaning parents. While Sun faces her first day on the job, her 14-year-old daughter Auri starts at the local high school, where she is soon targeted by bullies. Events rapidly deteriorate for the new sheriff, with a missing deputy, an escaped prisoner, and an abducted teen. With the help of various deputies and other law enforcement officers, and Auri, Sun must unravel all the mysteries and find the missing teen. As the investigations continue, Sun is also forced to face her own history and tell her daughter the truth about their past. Jones () departs from her usual paranormal fiction and creates a smart and sassy mother-daughter team in a small-town setting where anything can happen. Though readers may find it difficult to keep track of the minor characters, this series opener provides plenty of action. Recommended for fans of Linda Castillo and J.A. Jance.