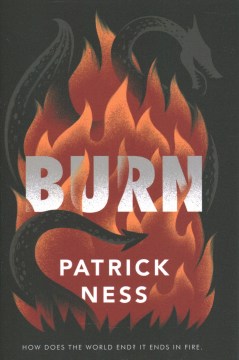 *Starred Review* It's 1957, and tensions between Russia and the U.S. are strained. In Frome, Washington, Sarah Dewhurst waits with her father in a gas station to meet the new worker they've just hired to help on their failing farm. In Canada, an assassin raised by a religious cult makes his way south while two FBI agents try to catch his trail. These tense, mysteriously connected Cold War–era story lines would be enough to hook any audience, but that hired hand that Sarah and her dad are waiting for? He's a centuries-old Russian blue dragon named Kazimir, and he brings with him knowledge of a prophecy that may change the course of history. Ness (And the Ocean Was Our Sky, 2018) has never been afraid to push boundaries when it comes to genre exploration, but this is a truly magnificent piece of fiction. There is not a single wasted moment in the tightly wrought story, and Ness has built an absorbing, complex alternate history where dragons have always lived alongside humans. It is through their mythos that he casts a sharp eye on the prejudices of the 1950s and the earth-shattering fears of the Cold War era. The concept is striking, the characters compelling, and the story enthralling. Even for Ness, this is a singular effort.HIGH-DEMAND BACKSTORY: Ness has been crossing genres and circumventing expectations ever since he followed up his dystopian Chaos Walking trilogy with the Carnegie-winning, best-selling A Monster Calls (2011). Add dragons, always popular, into that mix, and he'll be unstoppable. Grades 9-12. Copyright 2020 Booklist Reviews.

It's 1957, and Sarah Dewhurst's father has hired a dragon to work on their farm despite his prejudices against them. That's not really big news; in this alternate universe, humankind has maintained an uneasy peace with dragons for centuries. But, as Sarah learns, dragons are more complex than she'd imagined -- and the situation is more perilous: a cult of Believers, who worship the magical creatures, has sent a teenage assassin to the United States in an attempt to start a prophesied war (though he's been told his mission is to stop one), a war that will directly affect Sarah and everyone she loves. Nothing is quite as it seems in this imaginative novel. Timelines fluctuate, characters change species, and genres tangle together. However, the plot is solid enough to ensure that, with a healthy suspension of disbelief, readers will follow the story with ease as the stakes get ever higher. Ness's (The Knife of Never Letting Go, rev. 11/08; Release, rev. 9/17) engrossing historical-fantasy adventure is at once accessible and complex, tackling both human issues -- racism (Sarah is biracial; her love interest is Japanese American), war, religion -- and grand fantasy action with skill. Sarah A. Berman September/October 2020 p.102 Copyright 2020 Horn Book Magazine Reviews.

Too deeply in debt to engage human farmhands, 15-year-old Sarah Dewhurst's father is forced to hire a dragon to clear their farm's fields for planting. With Cold War tensions running high in an alternate 1957 America, employing a dragon, especially a rare Russian blue, is sure to be an unpopular move, but Sarah, who is biracial (black and white), already experiences daily racism in small-town Frome, Wash. Kazimir, the dragon, soon shows a mysterious interest in Sarah, offering protection from an unknown killer and indicating she may be the prophesied key to averting an apocalypse. In Canada, meanwhile, a teen called Malcolm, trained by a dragon-worshipping cult from childhood as an assassin, makes his way toward Frome on what he considers a "blessed" mission to save dragonkind. The relationship between Ness's () inclusive human cast, which encompasses characters of various ethnicities, belief systems, and sexual orientations, and his dragons—feared as immeasurably powerful and philosophical, yet derided as rustic and used as sharecroppers—makes for an interesting Cold War analog. The densely layered, expertly paced plot builds and twists while revealing an alternate universe that cunningly echoes our world and its history. Ages 14–up. (June)

Stronger than a bronze dragonFan, Mary