We Dream of Space 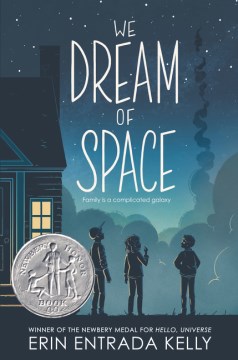 *Starred Review* The prolific, Newbery Medal–winning Kelly contemplates space exploration and sibling bonds in her latest captivating novel. Twins Fitch and Bird and their older brother Cash each have strikingly different personalities and carry on largely separate lives, retreating to their rooms and hobbies to escape their parents' frequent bickering and criticism. Kelly begins her chronicles of the Nelson-Thomas siblings on January 1, 1986, bookending the narrative with the hopes of a fresh year and the historic launch of the space shuttle Challenger. Although some readers may not be familiar with the Challenger mission, the book's lead-up to the tragedy is propelled by the siblings' alternating perspectives and the advancement of the calendar days represented by each chapter, giving readers the sensation of a countdown and resulting in absorbing momentum. Kelly deftly contrasts the hope and possibility of space exploration with the tempestuous home life of the Nelson-Thomas kids, where so much seems mundane and out of their control. The author never shies from difficult realities—whether national tragedy or domestic troubles—and offers no tidy solutions, instead allowing her characters a newfound sense of agency and the sweet reward of finding solace in each other. Another wondrous title from a remarkably talented author. Includes a section with information about Challenger and recommended resources. HIGH-DEMAND BACKSTORY: Award-winning Kelly is showing no signs of slowing her climb to the heights of kidlit fame. Be prepared for lots of requests for this one. Grades 4-7. Copyright 2020 Booklist Reviews.

In the foreground of this novel are three siblings. Twelve-year-old Fitch lives for video games and is angry through and through. His twin sister Bird is an amiable, peacekeeping engineering brainiac. Their older brother Cash feels he is a failure at school and everywhere else. In the middle ground is the toxic marriage of their parents, a couple given to sourness, sarcasm, and bickering. In the background, coloring the emotional tone of the book, establishing its historical setting, and propelling the plot, is the upcoming launch of the space shuttle Challenger in January 1986. With short chapters focusing alternately on each sibling, Kelly establishes distinct and original characters, doing an especially convincing job of re-creating, in Fitch, the physicality of rage. The form also emphasizes the emotional isolation of each member of the family. Middle school is portrayed in all its intensity, where a social misstep and an existential question about the meaning of life have the same weight. Tension builds until the shock of the Challenger disaster resets the relationship among the three children, releasing kindness in each one. Kelly creates a crisp, moving portrait of family dysfunction and the resilience of the young. Back matter provides information on the Challenger spacecraft and the seven crew members who died when it exploded, including schoolteacher Christa McAuliffe and mission specialist Judith Resnik (Bird's idol). Sarah Ellis May/June 2020 p.124 Copyright 2020 Horn Book Magazine Reviews.

Newbery Award–winner Kelly () follows three Delaware siblings in the weeks leading up to the January 1986 launch of the . Practical, schematics-interested Bird, 12, dreams of being NASA's "first female shuttle commander." Her twin, Fitch, who battles a temper, spends his afternoons at the arcade, waiting until the last minute to head home to their quarreling, sometimes volatile parents. After Cash, the twins' brooding 13-year-old brother, fails seventh grade, winds up in his siblings' grade, and is dropped from the basketball team, he breaks his wrist and ends up in a cast. Meanwhile, their science teacher endeavors to build her students' excitement for NASA's launch—and for a female teacher heading into space. But January 1986 is difficult for them all: Bird's feelings of insignificance and Cash's feelings of inadequacy grow, while Fitch is suspended for belittling a classmate in language similar to his fighting parents'. As Kelly's chapters count down to the 's disastrous launch, they document a family in crisis and three untethered siblings. With painfully accurate insight and clarity, Kelly shows the incredible power of words—the irreparable damage they inflict and their ability to uplift—while crafting a captivating story about family's enduring bonds. Ages 8–12. (May)

See you in the cosmosCheng, Jack

The crossover: a basketball novelAlexander, Kwame