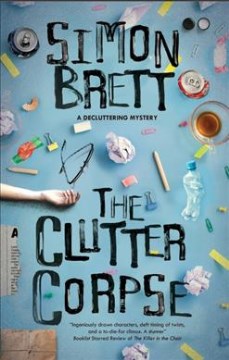 *Starred Review* Brett, who writes the Charles Paris mysteries, the Fethering mysteries, and the Mrs. Pargeter mysteries, and who has won the UK's Crime Writers Association's Diamond Dagger Award for sustained excellence in the genre, now launches a new series. This first Decluttering mystery provides a genially literal take on the role of the detective as someone who straightens out a very big mess. Ellen Curtis is a declutterer. Her job, sometimes at the invitation of people who need help with organization, sometimes at the behest of British social services for people whose hoarding has made their homes dangerous, means that she sees things most people never see and finds ways to deal with it. Ellen narrates, and we learn about the traumas in her past that make her compelled to bring order out of chaos. Ellen's first case with a corpse is in a hoarder's flat, which belongs to the mother of a young man just out of prison. Ellen finds a hand under a pile of mattresses attached to an emaciated young woman, a woman Ellen knew before the victim's descent leading to drug addiction and death. Watching Ellen investigate this crime on her own is thoroughly fascinating. Brett fans, along with readers who liked Richard Roper's How Not to Die Alone (2019), will love this quirky, warmhearted mystery. Copyright 2020 Booklist Reviews.

Ellen Curtis owns a business, SpaceWoman, helping people declutter their homes in southern England. Most of her jobs come from people whose family members are hoarders, and she tries to help them deal with their life issues as well. One of Ellen's best friends, Hilary, is a psychotherapist who works with prisoners who are about to be released. Because Hilary doesn't believe Nate Ogden will be released to his mother's home unless the house is cleaned up, Ellen agrees to help. Unexpectedly, she uncovers a drug addict's body stuffed in a back room, something that usually doesn't happen on her job. When Ellen recognizes the corpse, she's curious enough to dig into the past, meet with a drug dealer, and put herself in danger, typical behavior for an amateur sleuth. Brett, author of the "Fethering" and "Charles Paris" mysteries, launches a new series with a story that dwells too much on the protagonist's past and family history to make for a tedious, stuffy account. Readers may want to skip this cold introduction, which has more framework than mystery. [See Prepub Alert, 11/18/19.]

Set in Chichester, England, this gentle series launch from Brett (the Fethering mysteries) introduces Ellen Curtis, a widow with two grown children who runs her own business called SpaceWoman, which offers decluttering and interior restyling. As Ellen goes about a typical workday, she chats engagingly about her clients, her friends, her actor mother, her children, her deceased husband, and her adventurous youth. However, her afternoon takes an unexpected turn when she stops in at the cluttered apartment of Maureen Ogden, whose grown son, Nate, has recently been released on parole from prison where he was serving time for his live-in girlfriend's murder. Amid the stacked newspapers and piles of debris, Ellen finds the body of an emaciated young woman. Could Nate be the killer? Ellen decides to investigate. The languid lead-up to the body's discovery turns out to be necessary preparation for another murder and the denouement. The appealing Ellen is fortunate to pursue a profession that allows her to enter into the homes and minds of her clients. She is sure to win many loyal fans.

Grace under pressureHyzy, Julie A.

Ornaments of deathCleland, Jane K.
A nose for deathWhiting, Glynis

A disguise to die forVallere, Diane