Book of the little axe : a novel / Lauren Francis-Sharma. 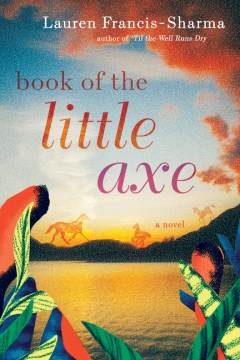 *Starred Review* Rosa Rendon never quite fit her proscribed place in 1790s Trinidad. Her passion for horses and the land ran counter to the expectation that young women would be focused on marriage and motherhood. Among free Black property owners, her family was comfortably set until Spanish rule gave way to British rule, which brought much harsher views of race and social station. What follows is a social upheaval so severe that by 1830, Rosa is living among the Crow Nation of Montana, married to a chief, and raising mixed-race children. Her old life is buried in the past, until her son, Victor, comes of age and cannot quite find his footing in the tribe. His fate resonates with Rosa. Upheaval in the tribe then forces Rose and Victor to undertake a journey that will unearth her secrets and the truth about how she was transplanted from the Caribbean to North America's Western plains. Francis-Sharma, author of the critically acclaimed Til the Well Runs Dry (2014), offers fascinating characters across the broad sweep of the American continent at a time of great tumult, warring colonial powers, the spread of slavery, and expansion West. This is a compelling saga of family bonds, ambitions, and desires, all subject to the vagaries of powerful historical forces. Copyright 2020 Booklist Reviews.

From the farms of Trinidad to the forests of the American West, the tale of Rosa Rendón is hard yet engrossing. Dark like her father, Demas, a free black man in that late 18th-century Spanish colony, Rosa was never embraced by her mother and siblings, nor did she accept the typically female role proposed for her. As her story comes out, interwoven with her later, and equally difficult, life in what is now Montana, the conflicts between white and black, man and woman, intensify. Several acts of violence culminate in Demas Rendón losing his farm and house, and Rosa fleeing the island for her life. She throws in her lot with the mysterious woodsman Creadon Rampley but later leaves him to become a wife to a Crow chief. Her son comes to struggle in the same way his mother did. The various strands of the story come together to illuminate how power and race can warp a life. A sad, compelling novel about a woman of color who fights against society's expectation, Francis-Sharma's novel (after ) is an excellent choice for book groups. [See Prepub Alert, 12/9/19.]

Francis-Sharma () delivers a satisfying and perceptive transnational family saga. In 1830 Montana, Victor Rose struggles to complete an Apsaalooke vision quest, while his best friend, Like-Wind, passes through their tribe's initiation rite. Victor and his mother, Rosa Rendon, flee after Victor witnesses the drowning death of a young woman who'd spurned him for Like-Wind, to avoid potential suspicion. While traveling, Victor discovers the journal of Creadon Rampley, a hardworking young wanderer from the States seeking gold in Trinidad, in Rosa's belongings. Here, the narrative flashes back to Rosa's childhood in Trinidad as the daughter of a prosperous free black farmer and blacksmith. When the British seize control of the colony and attempt to edge out all non-European landowners, Rosa's father takes desperate measures to keep the land, eventually settling on marrying Rosa's sister Eve to Creadon. Back on the trail, Victor and Rosa run into trouble on their way to Kullyspell territory. Like-Wind, having reluctantly led two Frenchmen to Victor and Rosa, is killed by one of the Frenchmen during a fight with them as Victor defends Rosa from their sexual assault. Creadon's writings and Rosa's memories disclose a cascade of family secrets that explains how Rose and Creadon ended up in North America. In this masterly epic, the pleasure lies in piecing everything together.