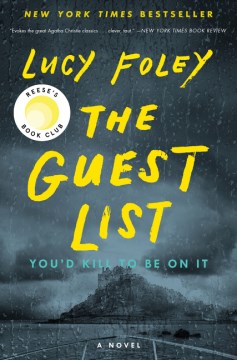 This is one guest list no one would want to be on, just as no one would have wanted an invitation to the New Year's Eve party in Foley's previous novel, The Hunting Party (2019). Lives unravel amid the revelry on an eerie and remote island as family and friends assemble for a glam wedding in an updated Murder on the Orient Express. Each of the principal characters has a reason to want one of their number dead. The narcissistic bride, the unstable bridesmaid, the odd wedding planner and her husband, the resentful plus-one, the groom and his former schoolmates, with "something dark and cruel hiding behind the schoolboy manners," who are revealed to be a pack of sadistic bullies. By the time the worst of them is found murdered, readers will not be sorry and might, in a Christie moment, have wanted to kill her or him themselves. At times the story threatens to overwhelm itself with a bit too much ominous darkness and "anxious distraction," but fans of the genre will enjoy the proceedings, imagining just how good that sumptuous wedding cake might have tasted. Copyright 2020 Booklist Reviews.

Foley () outdoes herself again with this page-turning thriller; it's like experiencing Agatha Christie's and rolled into one. A wedding taking place between an ambitious magazine publisher and a reality television star on an isolated island off the coast of Ireland, with friends and family in attendance. They all have secrets, and it only takes a few days of drinking games, isolation, and resentments to bring every murky feeling to the surface. The island and the ancient folly where the wedding party stays are themselves characters, adding to the feeling of almost supernatural mystery and the unease that something is lurking in the shadows and getting ready to strike. Only a handful of thriller writers can accomplish what Foley does here: weave a complex plot from the perspectives of eight characters plus an omniscient narrator without causing confusion or reader exhaustion when the plot bounces from one person to the next. Fans of Christie, Louise Penny, and Ruth Rendell will absolutely love this book, which doesn't reveal its secrets until the very last page. [See Prepub Alert, 11/25/19.]

Set on a remote island off the Irish coast where a massacre once occurred, this entertaining if uneven mystery from Foley () opens just after the high-profile wedding of Will Slater, the star of the reality TV show , and Julia Keegan, an online magazine editor. During the reception, the lights go out, prompting a "scream of terror," which turns out to have come from a server, who reports having seen a lot of blood. Flashbacks from various perspectives, including the bride and her sister, the maid of honor, recount what preceded the server's grim discovery—a body. Meanwhile, Julia is on edge after having received an anonymous note warning her not to marry Will, because he's not who he seems. Foley defers disclosing the murder victim's identity until quite late, but she undercuts the suspense with obvious indications of who it is. The tension of the setup isn't quite matched by the reveals, though the nicely creepy setting compensates somewhat. Readers seeking thrills will find plenty. Agent: Alexandra Machinist, ICM Partners. (May)