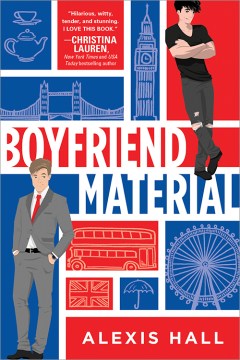 *Starred Review* Luc O'Donnell is in need of a normal, perfect boyfriend to repair his reputation. Too bad he doesn't trust anyone since his last boyfriend sold his story to the tabloids. As the son of estranged British 1980s rock stars, Luc is peripherally famous. He works for a nonprofit, and when donors start backing out because of him, "Operation Fake Respectable Boyfriend" is launched. Unfortunately, his friends decide to set him up with Oliver Blackwood, a barrister Luc has nothing in common with. Despite their date going poorly, Oliver agrees to a fake relationship since he needs a date for his parents' anniversary party. The more time they spend fake dating, though, the more they realize that opposites attract and that fake can turn real. Told from Luc's droll, self-deprecating, and completely charming perspective, Hall's low-heat romance is downright hilarious while it also seriously explores questions of self-worth and how relationships, romantic and platonic, can have effects both good and bad. Anglophiles will be pleased by the immersive London setting and many Briticisms. Hall achieves a true balance between romance and comedy, delightfully succeeding at both. Copyright 2020 Booklist Reviews.

Luc O'Donnell is sort of famous. The son of popular rock stars, he can't do normal things other guys his age do—get drunk, act wild, date bad boys—without popping up in the tabloids. Never mind that he has a perfectly respectable job as a charity fundraiser. Tabloids don't care about that. So Luc enlists his friends to find him the perfect fake boyfriend, and they deliver Oliver Blackwood. Oliver is a barrister, rather conservative, and also happens to need a fake boyfriend for his parents' anniversary in a few weeks. As the two try to figure out how a pretend relationship works, their real lives complicate matters. Hall () delivers a comedic romance with a not-very-sympathetic hero who tries to be better, a sexy barrister, and a gaggle of oddball secondary characters. Fans of Casey McQuiston's may enjoy.

Hall () breathes new life into the fake-dating trope with this effervescent queer rom-com. Luc O'Donnell, the hapless son of an aging British rock star, is tired of being a tabloid headline. When his employers at the small environmental charity where he works raise concerns about his public image and prompt him to find a stable relationship, Luc lets his friends set him up with Oliver Blackwood, a stuffy but sexy criminal barrister. Though their first date is a disaster, after Luc confesses his true motives, Oliver agrees to pose as his boyfriend at work events if Luc will return the favor at Oliver's parents' anniversary party. Their ruse gets its first test during a fancy work lunch in a hilarious, standout scene reminiscent of P.G. Wodehouse. Oliver proves to be "Annoying. And thoughtful. And protective. And secretly kind of funny" as he inspires Luc to take control of his life, supports Luc through his absentee father's cancer diagnosis, and teaches him sex can be meaningful. But Luc's efforts to help Oliver cope with his hypercritical parents backfire, leading to a delightfully comedic take on the inevitable grand romantic gesture. The writing is witty, and Luc and Oliver's chemistry is irresistible, but it's Hall's insights about trust and self-worth that set the story apart. This is a triumph.