Half Moon Bay : a novel / Jonathan Kellerman and Jesse Kellerman. 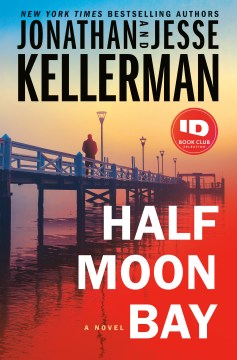 In Berkeley, County Coroner Clay Edison responds to the report of an infant's remains found buried in People's Park, halting the university's plan to turn the park into dormitories and igniting protests over the project's collateral damage. From the start, it's clear that Clay has little hope of identifying either the decades-old remains or the cause of death without finding a witness, and the man identified by DNA as the baby's father is a convicted murderer and refuses to cooperate. As the investigation stagnates, tech mogul Gary Franchette appeals to Clay to solve the mystery of his toddler half-sister's disappearance in the early 1970s. Could the bones in People's Park be hers? Clay can't resist looking into it off the books while confronting sleep deprivation, courtesy of his newborn, and dealing with those who don't want the secrets of the past revealed. Clay's thoughtful narration is procedural gold in this latest from the father-son Kellerman writing team. Copyright 2020 Booklist Reviews.

In three-time Edgar nominee Abbott's , the murder of adoption consultant Danielle Roberts in an upscale Austin neighborhood upends the Pollitt family, who feel grief, relief, and suspicion ("Never ask me what I'd do to protect my family," says the wife) (50,000-copy first printing). In three-time Edgar nominee Atkins's , Sheriff Quinn Colson, bullet-holed and left for dead, is feeling vengeful but kept from getting back to work by the interim sheriff—who ordered his murder. Continuing No. 1 best-selling Coulter's popular "FBI Thriller" series, has FBI Special Agent Lacey Sherlock and husband Dillon Savich dealing with a psychopath, a secret from beyond the grave, and three red boxes puzzlingly containing the puzzle pieces of an unknown town (200,000-copy first printing). The multi-award-winning Hamilton's brings back Van Shaw, tracking down the (worse-than-he-thought) father who abandoned him before birth while aiming to block a sociopath by stealing a viral weapon that could bring death to thousands (100,000-copy first printing). The acclaimed Kellermans' brings back Deputy Coroner Clay Edison, confounded by the discovery of a decades-old child's skeleton in a torn-up park and a local businessman's claim that it could be his sister. In mega-best-selling Camilla Läckberg's , the increasingly restless wife of a billionaire learns that he is having an affair and exacts luscious revenge. Patterson and Tebbetts join in , wherein Angela Hoot gets kicked out of MIT's graduate school, joins the FBI's cyber-forensics unit, and must deal with a messaging app whose beta users are dying without getting killed herself (475,000-copy first printing). In , the Gold Dagger-winning and Edgar short-listed Robotham continues the story of criminal psychologist Cyrus Haven and Evie Cormac, the girl without a past, first revealed in last year's And though there are no plot details to share regarding Silva's new Gabriel Allon thriller, the print run is 500,000, and word has it that MGM has acquired the rights to adapt the entire series for television.

In bestseller Kellerman and son Jesse's middling third mystery featuring deputy coroner Clay Edison (after 2018's ), Edison is called in after a construction project in a Berkeley, Calif., park unearths the remains of an infant. The location of the find leads activists opposing the construction to suggest that the bones belong to a Native American child and that the development be halted until the site is checked for other remains. Meanwhile, wealthy software designer Peter Franchette wants Edison to determine whether the skeleton is that of his missing sister, about whom he knows almost nothing, not even her name. Though Edison is able to rule out that possibility after concluding that the bones are male, he somewhat implausibly pursues evidence to see if he can give Franchette any answers. Ponderous prose is a minus ("I engraved their image in my mind, an icon to clutch close as I left them behind and descended to the realm of the dead"). The plotline and characters aren't indicative of either author's best work.