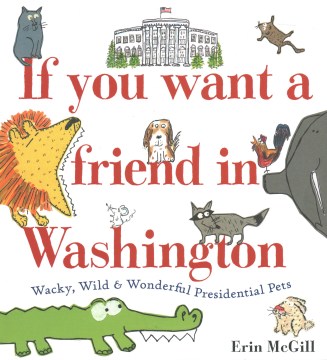 *Starred Review* As Harry S. Truman (may have) said, "If you want a friend in Washington, get a dog." And indeed, many presidents "found a friend in Fido," McGill writes, following a spread positively teeming with tiny, individualized doggy portraits—all named, or at least labeled, from "Drunkard Washington" to "Bo & Sonny Obama." But other First Families went for cats, horses, birds, livestock of various sorts, or even alligators and other wild animals, all of which are likewise laid out in populous galleries between pages of anecdotal commentary that is at least, as the author puts it, "rooted in fact." Alligators? Yes, John Quincy Adams had one, and Herbert Hoover's son Allan owned two. Billy Coolidge was a pygmy hippo, Martin Van Buren received two tiger cubs from the Sultan of Oman, Andrew Jackson owned a foul-mouthed parrot, and Thomas Jefferson used to harmonize on the violin with his mockingbird Dick. Celebrity cow Pauline Wayne Taft posed for one of the 17 photos on the endpapers. A closing tally of presidential pets (only two officeholders, including the current one, have had none) highlights the fact that the White House was often as much a menagerie as a residence. A fetching sidelight on U.S. history. Grades K-3. Copyright 2020 Booklist Reviews.

"If you want a friend in Washington, get a dog." That quote, attributed to Harry S. Truman, is probably apocryphal, but it certainly makes for an entertaining picture-book premise. McGill begins by explaining that many presidential pets have indeed been dogs, 142 of them showcased in a spread of loose-lined spot illustrations with captions for each of the dogs' names ("Drunkard Washington"; "Veto Garfield"). Then she relates a few stories about particular presidents and their canines (including Truman, who didn't keep the cocker spaniel that a supporter sent him). This narrative pattern repeats as McGill notes that sometimes presidents prefer cats (twenty of those), horses (fifty-five), other farm animals (thirty-two), or birds (forty-two). Or even exotic big animals (Jefferson's grizzlies; lions named "Tax Reduction and Budget Bureau Coolidge"). Or small critters (the Quincy Adams silkworms; the guinea pigs and flying squirrels in Theodore Roosevelt's family). Organization of the pets by category creates an easy-to-follow structure for sharing lots of fascinating presidential trivia, and the cartoony illustrations, rendered in cut paper, ink, gouache, marker, and colored pencil, are playful and kid-friendly. For context, McGill has appended sources and a list with each president, his years in office, and the types and names of all of his pets (or occasional lack thereof). The front and back endpapers round out the presentation with black-and-white photos of First Families posing with their pets. Cynthia K. Ritter July/August 2020 p.152 Copyright 2020 Horn Book Magazine Reviews.

Showcasing the madcap menagerie of pets that U.S. presidents have kept, this picture book employs an entertaining refrain based on a Truman quote ("If you want a friend in Washington, get a dog"), that ends here with "and is what many presidents got." Offering whimsical, if sometimes immediately uncontextualized, facts about animal companions ("George H.W. Bush's dog, Millie, wrote a book for the First Lady, Barbara"), the book also includes more unusual pets, such as John Quincy Adam's bathroom-bound alligator. Childlike mixed-media art provide a fitting complement to the buoyant text. The spreads might be more enlightening if catalogued in sequential presidential order, but this book is a treat for anyone with an affinity for pets, presidents, fun facts, or all of the above. Back matter includes a note about the text and art, as well as a consolidated list of each president's respective pets. Ages 5–9.