A star is bored / Byron Lane. 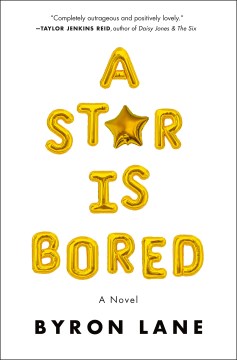 Charlie Besson is a suicidal sad-sack when he takes a job as the personal assistant to his childhood idol, Kathi Kannon, who played Priestess Talara in the Nova Quest space opera movies and is now a quirky, more-or-less recovering drug addict. Charlie, whom Kathi affectionately nicknames Cockring, learns that being a celebrity personal assistant is a lifestyle, not a job, and soon he is wearing designer sweaters, regaling other assistants with Kathi's exploits over drinks, and diligently distributing Kathi's daily pills, which she mostly takes. If Kathi sounds familiar (she has a kooky-looking dog, Roy, and her mother, screen legend Gracie Gold, lives next door), it's because Lane is a former assistant to the late Carrie Fisher. There are few juicy revelations, since Fisher was so open about her struggle with sobriety, but that doesn't take away from the effect of the novel. Charlie and Kathi are a dysfunctional match, and under Kathi's frenetic tutelage and manic adventurousness, Charlie manages to become his own man. A funny, tender-hearted, and humane Hollywood story. Copyright 2020 Booklist Reviews.

DEBUT Thinly veiled stories of the rich and famous have always been popular; Lane's new roman à clef about his time as actress/writer Carrie Fisher's personal assistant is sure to make a splash. Struggling writer Charlie Besson gets a job working for Hollywood icon Kathi Kannon, who immediately christens him "Cockring." Things get even crazier from there. Charlie lost his mother as a child, he's gay, and his relationship with his abusive father is fraught. Kathi is a bipolar drug addict who needs to be closely monitored, and she's lonely. Kathi and Charlie develop a strong bond. He makes sure she takes her meds, takes her wherever she wants to go, and listens to her. She becomes almost a mother figure to Charlie. It is not always clear who is helping whom more, but things are not as idyllic as Charlie wants to believe. Told with empathy, charm, and a lot of humor, Lane's look at celebrity life is surprisingly relatable—he may soon find himself in need of a personal assistant. A peek inside the wacky life of beloved Hollywood royalty, this debut novel should have wide appeal. Read-alikes include Lauren Weisberger's and Joyce Carol Oates's .

Lane debuts with a fizzy roman à clef about a celebrity assistant, playfully alluding to his experience working for the late actor Carrie Fisher. Lane begins with Charlie Besson's job interview, "panicked and parked outside the estate of Hollywood royalty." The job is an assistant to Kathi Kannon, famous for playing the beloved Priestess Talara in the science fiction epic (a thinly veiled Charlie, who left behind a dull career as a local TV news writer to work for Kathi, narrates his process of learning the ropes of being an assistant, while attempting to heal from a pattern of self-destructive drinking and unprotected sex. Charlie travels with Kathi, helps her cope with addiction, and develops a bond with his boss, earning endearing nicknames like Cockring and Stepson. Lane brings wit and tenderness to Kathi's mostly acerbic personality, and her attachment to Charlie is potent and palpable. As Charlie grapples with finding his passion and place in the world, Kathi tells him, "I'm giving you the best shit to write about… this will all be funny one day," and he latches on to Kathi as his "superpower," to the frustration and bemusement of the men he dates. If any of this were true (a note from Lane's attorney says otherwise), Lane's affecting tale would show how the real Charlie found his own superpower—as a novelist. (July)