Borges and me : an encounter / Jay Parini. 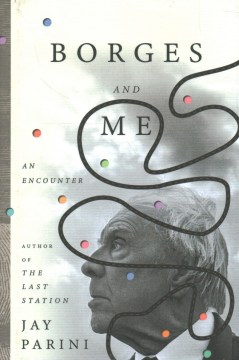 Parini—biographer, novelist, poet—delivers his most unusual work, a fictionalized memoir (he explains his inventions) recalling his beginnings as a writer. Fifty years ago, Parini became a doctoral student at St. Andrews in Scotland, where he'd spent an undergraduate year. Aside from immersion in British poetry, he mainly wanted to avoid the U.S. draft if not also his overbearing mother. Good friends were serving in Vietnam, but Parini had no interest in or aptitude for becoming a mud-caked soldier. A mentor invited Parini to tend to a distinguished visitor, the Argentinian fabulist Jorge Luis Borges, whose story, "Borges and I," about the divide between the self and the persona of writer, inspired this book's title. Parini's week with the crusty Borges included a rollicking, endearing road trip through the Scottish Highlands. Parini haltingly describes the landscape for his blind passenger, who taps his memory for a bounty of literary wisdom. Along with losing his innocence to a frisky innkeeper, Parini absorbed indelible lessons. Not least, Borges' advice on the task of writing, "To find a language adequate to what is revealed." Copyright 2020 Booklist Reviews.

In this astute memoir, novelist Parini () writes of leaving Pennsylvania in 1971 to pursue a PhD in literature at St. Andrews in Scotland. There, he describes himself as the "last 22-year-old virgin in the Age of Aquarius" as he finds his voice as a writer and escapes the draft. He soon falls for antiwar activist Bella Law, who has a boyfriend and is indifferent to Parini's meek advances. Then, after Parini's writing mentor, poet Alastair Reid, asks him to host his houseguest, Argentinian author Jorge Luis Borges, a one-week ramble through the Scottish Highlands ensues. His mission: to describe the entire trip for the blind writer ("He knew what he wanted to see. Or to have me describe"). Parini also plans to meet his thesis subject, poet George Mackay Brown, on the isle of Orkney, but on the way realizes that Borges, a "batty old man of letters," is a literary jukebox, referring to such literary works as (while capsizing their rowboat on Loch Ness) and writers including Victorian poet Gerard Manley Hopkins. Over the days, a tender bond forms between the eccentric sage and his caretaker. En route to meeting Brown, Parini loses his virginity to a free-spirited innkeeper's daughter, and, newly emboldened, Parini returns to St. Andrews and kindles a relationship with Bella as he matures as an author, writing, "I could sense my own voice emerging." Fans of both Borges and Parini will delight in this touching coming-of-age memoir.

Between you and me: confessions of a comma queenNorris, Mary, (Editor)

A year of writing dangerously: a scholarly detective story of the lost generationGandal, Keith

The writer's library: the authors you love on the books that changed their livesPearl, Nancy

The uncommon reader: a life of Edward GarnettSmith, Helen, 1965-

Birth of a dream weaver: a writer's awakeningNgugi wa Thiong'o, 1938-