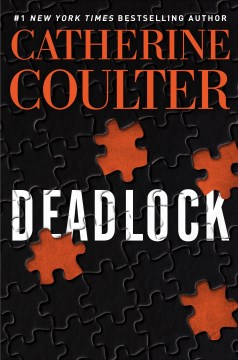 In three-time Edgar nominee Abbott's , the murder of adoption consultant Danielle Roberts in an upscale Austin neighborhood upends the Pollitt family, who feel grief, relief, and suspicion ("Never ask me what I'd do to protect my family," says the wife) (50,000-copy first printing). In three-time Edgar nominee Atkins's , Sheriff Quinn Colson, bullet-holed and left for dead, is feeling vengeful but kept from getting back to work by the interim sheriff—who ordered his murder. Continuing No. 1 best-selling Coulter's popular "FBI Thriller" series, has FBI Special Agent Lacey Sherlock and husband Dillon Savich dealing with a psychopath, a secret from beyond the grave, and three red boxes puzzlingly containing the puzzle pieces of an unknown town (200,000-copy first printing). The multi-award-winning Hamilton's brings back Van Shaw, tracking down the (worse-than-he-thought) father who abandoned him before birth while aiming to block a sociopath by stealing a viral weapon that could bring death to thousands (100,000-copy first printing). The acclaimed Kellermans' brings back Deputy Coroner Clay Edison, confounded by the discovery of a decades-old child's skeleton in a torn-up park and a local businessman's claim that it could be his sister. In mega-best-selling Camilla Läckberg's , the increasingly restless wife of a billionaire learns that he is having an affair and exacts luscious revenge. Patterson and Tebbetts join in , wherein Angela Hoot gets kicked out of MIT's graduate school, joins the FBI's cyber-forensics unit, and must deal with a messaging app whose beta users are dying without getting killed herself (475,000-copy first printing). In , the Gold Dagger-winning and Edgar short-listed Robotham continues the story of criminal psychologist Cyrus Haven and Evie Cormac, the girl without a past, first revealed in last year's And though there are no plot details to share regarding Silva's new Gabriel Allon thriller, the print run is 500,000, and word has it that MGM has acquired the rights to adapt the entire series for television.

At the start of bestseller Coulter's intricate 24th FBI thriller (after 2019's ), Marsia Gay awaits trial in a D.C. detention center for an unspecified crime and vows revenge on FBI agent Dillon Savich, whom she blames for her arrest, and Savich's FBI agent wife, Lacey Sherlock. Soon someone starts sending Savich puzzle pieces, which Savich figures out with the aid of fellow FBI agent Pippa Cinelli show a pier in St. Lumis, Md., where Pippa grew up. Pippa goes undercover in St. Lumis, where she finds a copy of the puzzle in a shop. After Pippa is attacked, Savich travels to St. Lumis to help her, and in his absence, Sherlock and their small son barely escape an arsonist's fire at their Washington, D.C., home. Savich's efforts to figure out what's going on eventually lead him to Marsia. A subplot involving a mysterious medium and the disappearance of Rebekah Manvers, a congressman's wife Savich recently saved from an attempted kidnapping, heightens the tension. Coulter expertly weaves all the plot threads together. Fans of extravagant thrillers with a paranormal tinge will be satisfied.