Eat a peach : a memoir / David Chang with Gabe Ulla. 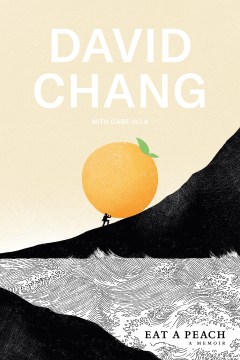 Throughout his first memoir, chef, restaurateur, and Ugly Delicious host Chang (Momofuku: A Cookbook) never loses sight of the monumental weirdness of writing a book about himself. While he discusses his upbringing in a Korean American family with poignance, particularly his relationship with his father, this is primarily a book about Chang's career and mental health, and how the two are intertwined. After some post-college searching that led to culinary school, in the early aughts he opened Momofuku Noodle Bar in Manhattan's East Village. One restaurant became several, with accolades and new opportunities aplenty. But Chang is just as open about professional missteps as successes, lauding his talented team while never sparing himself criticism. He also applies brave transparency to the realities of coping with his bipolar disorder, and battling suicidal thoughts. Culinary-minded readers will find much instruction here (including a section on 33 rules for becoming a chef), as well as the intimate self-portrait of a chef who works hard not to be at the top of his game, but instead always growing. Copyright 2020 Booklist Reviews.

Chang is a big name in the culinary world. From Momofuku and his other restaurants, to the gone-too-soon magazine , to the popular Netflix show , his star has continued to rise, despite the occasional setback. Is it luck? Hard work? Tenacity? Yes, to all that and more. Chang's memoir wrestles with those questions and the feelings of inferiority, rage, and depression that have plagued him all his life, from his time first working in kitchens to success as a restaurateur to becoming a father. He is as open about his life with bipolar disorder and struggle with self-destructive impulses as he is in describing the missteps he made while managing the Momofuku empire. This openness about the business side of the culinary world makes for a compelling read, even as readers might wince at some of Chang's self-excoriation. He closes the book with a list of 33 Rules for Becoming a Chef; anyone considering the life would do well to read it before getting started. A solid choice for memoir fans and chef-followers alike.

Chang (), Momofuku restaurateur and star of Netflix's , starts this self-effacing, heart-on-sleeve memoir with a disclaimer: "Frankly, I just don't understand my appeal." Chang writes about being a hard-driving Korean-American kid with an anger problem who channeled his frustrations into an eagerness to test limits and himself. He left a "soul-sucking" post-college finance job after discovering that, though he was far from a natural at cooking, it was something he "didn't hate doing." He opened his first restaurant, Momofuku Noodle Bar, in the East Village in 2004 at least partially to stave off suicide, and in the course of becoming an international restaurateur, Chang tried to upend people's expectations of ethnic culinary categories while pushing himself to the financial and emotional brink. Chang writes about the sweaty tension of his manic episodes and his dark depression, and there are stories of kitchen screaming fits, reflections on being in the "cool chefs club," and particularly affecting passages about Chang's late friend, Anthony Bourdain. In the book's most heartfelt section, Chang rhapsodizes about the egalitarian Asian dining ethos he wanted to import to the West and even allows himself a rare pat on the back for his influence ("Food across the country had become porkier, spicier, brighter, better"). Foodies and chefs alike will dig into Chang's searing memoir.

An onion in my pocket: my life with vegetablesMadison, Deborah

Save me the plums: my gourmet memoirReichl, Ruth

Cooking as fast as I can: a chef's story of family, food, and forgivenessCora, Cat

Where I come from: life lessons from a Latino chefSanchez, Aaron

Blood, bones, and butter: the inadvertent education of a reluctant chefHamilton, Gabrielle