Everything sad is untrue : (a true story) / Daniel Nayeri. 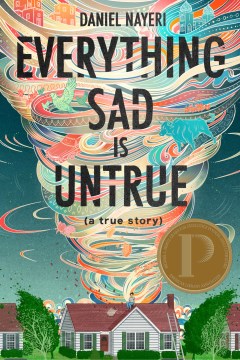 *Starred Review* "A patchwork story is the shame of a refugee." It's with this refrain that 12-year-old Khosrou, known as Daniel to his skeptical Oklahoman classmates, tells "a version" of his life story. In the tradition of 1,001 Nights' Scheherazade, he gathers up the loose strands of his memory, weaving short personal vignettes into the Persian histories, myths, and legends that are his ancestry. The result is a winding series of digressions that takes the reader on a journey as intimate as it is epic, knitting together a tale of Daniel's youth in Iran, the perilous flight from home with his sister and mother, and their oppressive new beginning as refugees in Oklahoma. It's a story heavy with loss (of home, of his left-behind father, of innocence), light with humor and love (for his mother, the "unstoppable force"), rich in culture and language (and, somehow, never sentimental). Walking the line between fiction and non-, this is a kind of meta-memoir, a story about the stories that define us. It's a novel, narrated conversationally—and poetically—by a boy reaching for the truth in his fading youth. Nayeri challenges outright what young readers can handle, in form and content, but who can deny him when it's his own experience on display? He demands much of readers, but in return he gives them everything. A remarkable work that raises the literary bar in children's lit. Grades 7-12. Copyright 2020 Booklist Reviews.

Framed loosely as his twelve-year-old self's responses to a series of school assignments, Nayeri's fictionalized memoir swirls through his own memories as well as stories from his family history, circling around major events and pausing to include his Oklahoma classmates' reactions to his tales of early childhood in Iran. This structure means the story takes some time to pick up speed -- which it does once it goes into more focused detail about Nayeri's family's journey: their quick escape from Iran after his mother's life was threatened because she had converted to Christianity; his father's decision to stay behind. The buildup comprises tangent upon tangent -- Nayeri alludes frequently to Scheherazade's stringing together of stories in the 1,001 Nights -- but those tangents are absorbing and full of universalizing detail and humor (there's more than one poop anecdote). This tale is constantly focused on its telling, with references to an imagined audience and reminders of who characters are. The actual audience is a bit of a puzzle, as the twelve-year-old narrator's tale spans a wide range of ages in his life and those of his family members, and the overall sensibility seems more adult than not. An author's note acknowledges the fallibility of memory as well as some deliberate alterations; it is, as Nayeri puts it, "both fiction and nonfiction at the same time." Shoshana Flax November/December 2020 p.107 Copyright 2020 Horn Book Magazine Reviews.

Marked by a distinctive voice—a straightforward mix of confiding, slyly humorous, and unsentimentally sorrowful—Nayeri's () impressive autobiographical novel is narrated by 12-year-old Khosrou, known as Daniel, who models himself after the legendary Scheherazade. The chapterless "patchwork story" follows Daniel through his dreamlike early childhood in Iran, a year in an Italian refugee camp with his sister and "unstoppable" mother (but without his larger-than-life father, who chose to stay behind), and their eventual asylum in Oklahoma. The text moves nimbly back and forth in time, depicting with equal vividness ancient Persian tales (a jasmine-scented village with saffron fields, courtyards, and fountains), family history (a legendary ancestral doctor), and the challenges of navigating life as an outsider in "a land of concrete and weathermen." Interspersed with his experiences is the narrator's accumulated wisdom on a broad range of subjects—cultural differences in bathroom habits, the creation of Persian rugs, the roots of today's conflicts between Shiites and Sunnis—which help establish Daniel's identity as a knowledgeable, thoughtful storyteller. Mesmerizing and hard-hitting at once, this work of personal mythology is a rare treasure of a book. Ages 10–up.