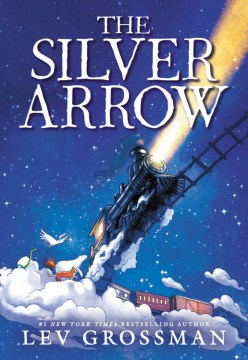 *Starred Review* Eleven-year-old Kate longs for something more than her humdrum, normal-kid existence, and it arrives in the form of her eccentric Uncle Herbert, who has a birthday present in tow: a life-sized steam engine, the splendid Silver Arrow. When Kate and her brother notice a glow coming from the engine, they climb aboard, and the train lurches to life. Thus the bewildered siblings are sent on the mission of a lifetime, collecting ticketed animals at each stop and transporting them safely to their destinations. It's an initially cheerful premise—the children learn how to operate the magical locomotive, which communicates via cheeky printouts, and the various animals are chatty and charming. As the train puffs on, however, it becomes clear these are desperate trips for the passengers, who are relocating from endangered habitats to keep their species alive. Grossman's gorgeous middle-grade debut is vivid and amusing, and despite delightful shades of Dahl's whimsy and Pinkwater's wry directness, it's a world all its own. This gentle introduction to the complexities of life on this planet is a critical reminder not to despair over the enormity of human responsibility but to face it with joy and marvel at the magic that the world holds. It's a kind and clear message that all children—and their grownups—should take to heart. Grades 4-7. Copyright 2020 Booklist Reviews.

After writing to her rich uncle to cheekily request a present for her eleventh birthday, Kate is surprised when a full-sized locomotive shows up the next day. Resolved to get as much enjoyment out of it as possible before their mother makes Uncle Herbert remove it, Kate and her little brother Tom examine it before supper, and an offhand wish on Kate's part makes the train embark on what is obviously a magical adventure. Learning the train's ways (the sentient engine can communicate via slips of paper), Kate and Tom thrill to their new lives as magical train conductors, taking on the work of delivering talking animals to their migratory destinations, each with a ticket clamped in its jaws. Grossman, whose droll turns of phrase continuously enliven the story, adroitly captures the practical yet yearning inner voice of Kate while loading the narrative with feasts-in-Narnia-level gratifications for readers: Kate and Tom request (and receive) a candy car for the train, spend a season as T. H. White-inspired trees, and encounter a baby pangolin who enchants all parties with its infant cuteness. But Grossman, author of the popular Magicians trilogy for adults, refuses to provide the escape that fantasy so often supplies, introducing human answerability with environmental degradation, a starving polar bear, and invasive species. Still, Kate and Tom's extraordinary adventure fulfills enough reader wishes that most won't mind ingesting a few vegetables along with this scrumptious fantasy confection. Anita L. Burkam September/October 2020 p.90 Copyright 2020 Horn Book Magazine Reviews.

Blending elements of conservation and magic, Grossman (, for adults) crafts a timeless-feeling, Travers-tinged adventure in his middle grade debut. On her 11th birthday, Kate's uncle Herbert, "very rich and totally irresponsible," gives her an unexpected present: a life-size steam locomotive named the . Kate and her younger brother Tom, finding the train fueled, are soon swept away by the sentient locomotive—which communicates with them via printed messages—first to acquire a selection of train cars (including delightfully stuffed candy and library compartments), and then to serve as conductors on an international rail system that transports talking animals, large and small, to new habitats. While learning to run the train and solve problems on their own, the siblings bond with myriad passengers and begin to understand global issues surrounding endangered and invasive species, habitat loss, and environmental stewardship. Though it's unclear why the magic train burns coal—a nonrenewable resource—in service of otherwise strong ecological messaging, whimsical details and well-wrought moments of adventure are neverthless certain to draw young readers. Final art not seen by . Ages 8–up. (Sept.)