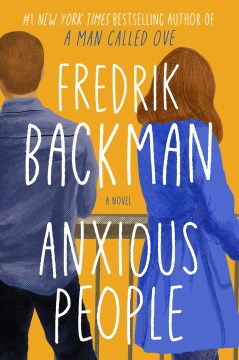 When the world's most hapless bank robber inadvertently takes a group of the world's most helpful people hostage, hilarity doesn't exactly ensue as much as it evolves. With a failed marriage, no job, potential loss of child custody, and a looming eviction, the idea of robbing a bank presents itself as an appealing solution to this harrowing list of woes. When the bank turns out to be one of those new-fangled cashless entities, the foiled robber flees and dashes into a nearby apartment building where an eclectic group of potential buyers is suffering through a sale's pitch. Unwitting participants in the developing drama, the group nonetheless warms to their wannabe-bank-robber captor and each other over the course of the day's events. In this small suburb of Stockholm, only the local police are on the scene, a father-and-son team who try hard not to step on each other's toes while deescalating the hostage situation and interviewing witnesses. With poignant and sympathetic care, the always incisive and charming Backman (Us Against You, 2017), gently examines garden-variety insecurities against a quaint pre-pandemic backdrop. Copyright 2020 Booklist Reviews.

Wealthy bank director Zara visits open houses to feel normal. Roger and Anna-Lena obsess over fixer-uppers because they can't manage their own marriage. Expecting lesbian parents Julia and Ro want something to agree on. And cool and collected 80-year-old Estelle has her own reasons for house hunting. They're all trapped at an open house by a masked gunman eventually less scared of the police outside than the nutty people within. With a 350,000-copy first printing.

In this latest from the author whose string of international hits began with , bossy bank director Zara, troubled husband-and-wife Roger and Anna-Lena, expecting lesbian parents Julia and Ro, charming 80-year-old Estelle, and a near-naked man wearing a bunny head all have their reasons for showing up at an open house on New Year's Eve, even as an inept bank robber rushes in and inadvertently becomes a hostage taker. This situation attracts the attention of a bumbling father-and-son police team who emerge in the end as gentle heroes but are initially stymied upon leading the hostages to safety: The bank robber is not among them. Cutting back and forth in time, the tight-knit, surprise-filled narrative slowly unravels this mystery while revealing the poignant backstories of both hostages and hostage taker, even as rattled nerves lead to some very funny exchanges. Meanwhile, the story of a suicide wrought by economic extremis quietly frames the action, unexpectedly tying together characters, and the brisk, absorbing action prompts meditation on marriage, parenting, responsibility, and global economic pressures. Comedy, drama, mystery, and social study, this novel is undefinable except for the sheer reading pleasure it delivers. Highly recommended. [See Prepub Alert, 2/24/20.]

A diverse assortment of Swedes gets caught in an unlikely hostage situation in Backman's witty, lighthearted romp (after ). On the day before New Year's Eve, in a "not particularly large or noteworthy town," a desperate parent attempts to rob a bank in order to provide for two young children. After the police arrive, the amateur stickup artist flees and stumbles into an apartment's open house. The attendees, including a heavily pregnant, first-time home-buying lesbian couple; an apartment-flipping older couple; and Zara, an executive at another bank, become hostages. Meanwhile, father and son police officers Jim and Jack scramble into action. The appearance of a man wearing nothing but underwear and a bunny mask, hired by the flippers to sabotage the open house, adds to the drama. Backman layers the hostage scene with threads of backstory on Zara's regret for denying a loan to a man ten years earlier, along with developments in Jack and Jim's investigation. While the prose is chockablock with odd metaphors ("Our hearts are bars of soap that we keep losing hold of") and a plot twist leans on societal assumptions, Backman charms with his empathetic description of the robber, who gradually earns sympathy from the hostages. This amusing send-up of contemporary Swedish society is worth a look.