Caste : the origins of our discontents / Isabel Wilkerson. 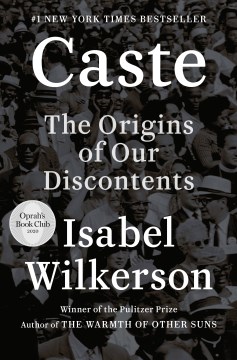 *Starred Review* "Just as DNA is the code of instructions for cell development, caste is the operating system for economic, political, and social interaction in the United States from the time of its gestation," asserts Wilkerson, author of The Warmth of Other Suns (2010), which garnered many honors, including the Anisfiled-Wolf Award. She explores slavery and the decimation of Native Americans, the "authoritarian regime" of Jim Crow, and the transformation of European immigrants into whites with caste status. She draws parallels between the U.S. and India, both colonized by Britain, both having achieved independence and developed democracy, yet both saddled with the legacy of severe social stratification. She also explores the history of the Third Reich for lessons on racial separation. Wilkerson details the eight pillars of caste, including divine will, heritability, enforcement by terror, and inherent superiority versus inferiority. Drawing on genetics, anthropology, religion, and economics, Wilkerson examines the history and structure of caste. But she also draws on her exceptional journalistic skills to relate stories of individuals who have suffered disadvantages and humiliation but have triumphed nonetheless. Finally, she offers the prospect for the elimination of a destructive system and recognition of a common humanity that allows us each to be who we are without judgment. This is a brilliant book, well timed in the face of a pandemic and police brutality that cleave along the lines of a caste system.HIGH-DEMAND BACKSTORY: The Warmth of Other Suns topped group read lists everywhere, and Caste will be the book to read in light of current discussions about systemic racism. Copyright 2020 Booklist Reviews.

While researching her best-selling , Pulitzer Prize-winning author Wilkerson realized the importance of social order. In this outstanding work of social history, she explains how a rigid social order, or caste, is about power. Beginning with the first caste system in the United States, which started with slavery in 1619, Wilkerson details how caste would become the cornerstone of U.S. social, political, and economic policy, with whites being dominant, African Americans subordinate, and Native Americans conquered. She shows how immigrants walk into a preexisting hierarchy as they try to integrate into American culture, and how constructing one's white racial identity often means defining oneself from its opposite: Black. Powerful chapters parallel three systems—slavery in the American South, the reign of Nazi Germany, and hierarchies in India—in order to explore how each relied on control, including dehumanization, endogamy, and purity via immigration laws. Wilkerson reminds us that, despite the passage of civil rights legislation, caste endures in infrastructures and institutions, and that the election of Barack Obama was the biggest departure from this system in U.S. history. Incidents of historical and contemporary violence against African Americans resonate throughout this incisive work. Similar to her previous book, the latest by Wilkerson is destined to become a classic, and is urgent, essential reading for all.

In this powerful and extraordinarily timely social history, Pulitzer winner Wilkerson () investigates the origins, evolution, and inner workings of America's "shape-shifting, unspoken" caste system. Tracking the inception of the country's race-based "ranking of human value" to the arrival of the first slave ship in 1619, Wilkerson draws on the works of anthropologists, geneticists, and social economists to uncover the arbitrariness of racial divisions, and finds startling parallels to the caste systems of India and Nazi Germany. The Nazis, Wilkerson notes, studied America's restrictive immigration and anti-miscegenation laws to develop their own racial purity edicts, and were impressed by the "American custom of lynching" and "knack for maintaining an air of robust innocence in the wake of mass death." While India abolished formal laws that defined its caste systems in the 1940s, and America passed civil rights measures in the '60s, their respective hierarchies live on, Wilkerson writes, in "hearts and habits, institutions and infrastructures." Wilkerson cites studies showing that black Americans have the highest rates of stress-induced chronic diseases of all ethnic groups in the U.S., and that a third of African Americans hold antiblack biases against themselves. Incisive autobiographical anecdotes and captivating portraits of black pioneers including baseball pitcher Satchel Paige and husband-and-wife anthropologists Allison and Elizabeth Davis reveal the steep price U.S. society pays for limiting the potential of black Americans. This enthralling exposé deserves a wide and impassioned readership.