First principles : what America's founders learned from the Greeks and Romans and how that shaped our country / Thomas E. Ricks. 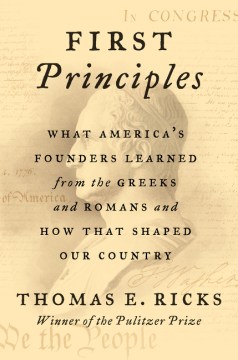 After the 2016 election, Pulitzer Prize-winning journalist and Pulitzer Prize finalist and No. 1 best-selling author Ricks () sought to understand what the Founding Fathers really had in mind. So he looked at their main reading materials, which comprised not so much the political thinkers of the era but the classics, from Xenophon and Aristotle to Cicero and the Epicureans. With a 150,000-copy first printing.

Ricks () does something quite remarkable: he takes a seemingly academic topic—the Greco-Roman education of the Founding Fathers—and makes it resonate with grand relevance. Readers get to meet young Jefferson, the Epicurean romantic; James Madison, a free-thinking student at Princeton; and John Adams, the Ciceronian. The education of the Founders, so often relegated to a sentence or two, is the theme of this book, which makes it unique among the plethora of works on them. The Roman Republic, and the lessons of its fall, were prime themes in the student lives of the Founding Fathers. Colonial collegiate politics, including the divergence between radical Princeton and conservative King's College (Columbia) is discussed. Scotland's contribution to the American Revolution is also highlighted. Ricks further explores the descent of classicism in the new republic, and explains Aristotle's thoughts on the concept of "natural slavery." The author comments on current politics in the beginning and end of the work, which, on the one hand, apply to classical principles discussed within, but on the other may date this edition in a few years. Offering a look at the Founders rarely glimpsed, Ricks successfully argues that America needs to rediscover its classical roots.

Pulitzer Prize winner Ricks () delivers an immersive and enlightening look at how the classical educations of the first four U.S. presidents (George Washington, John Adams, Thomas Jefferson, and James Madison) influenced their thinking and the shape of American democracy. According to Ricks, the evolution of Washington's military strategy during the Revolutionary War drew from Roman general Fabius's defeat of Hannibal in 203 BCE. Ricks also documents classical antecedents in the construction of the Constitution and Thomas Jefferson's architectural plans for government buildings in Washington, D.C., and analyzes 18th-century opinions on the ancient world expressed in Robert Dodsley's textbook ("a blueprint for the Declaration of Independence") and Joseph Addison's play . The Amphictyonic League, a confederation of early Greek cities, is partly responsible for the U.S. Senate's equalized representation regardless of state size, Ricks points out. The book closes with suggested steps for returning America "to the course intended by the Revolutionary generation," including "don't panic," "re-focus on the public good," and "wake up Congress." With incisive selections from primary sources and astute cultural and political analysis, this lucid and entertaining account is a valuable take on American history.