Fault lines in the constitution, the graphic novel : the framers, their fights, and the flaws that affect us today / written by Cynthia Levinson and Sanford Levinson ; art by Ally Shwed ; color by Gerardo Alba Rojas ; lettering by Angela Boyle. 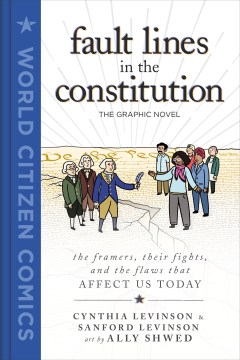 Did you know that Washington, DC, residents couldn't vote in presidential elections until 1961? Or that Montana's state constitution allows the lieutenant governor to step in as acting governor if the governor is absent from office for 45 days? These and other facts decorate Fault Lines in the Constitution as the authors juxtapose the original writing and ratifying of the U.S. Constitution with the troubling effects its clauses still present. The Levinsons create an approachable mix of anecdotes, comparisons with governments from around the world, and a fanciful imagining of the Framers frustratedly yelling and throwing their hands in the air. This tone, plus Shwed's intentionally limited color palette of mostly red, white, blue, black, and gold, calls to mind Schoolhouse Rock animations about the government, though this can occasionally lead to characters based on real people being tricky to identify. The report card at the end may be controversial, but the recommended reading list and inclusion of liberal and conservative objections make for a fair case about the need to examine and update this founding document. Copyright 2020 Booklist Reviews.

This jaunty graphic adaptation of the Levinsons' 2017 youth guide to "the framers, their fights, and the flaws that affect us today" highlights the enduring problem points in the foundational document of the United States. Each chapter opens with real-life dilemmas that, according to the authors, stemmed from "crises we've faced since 1787 the limitations, ambiguities, and flatly bad ideas in the Constitution." The work is at its strongest in these personalized anecdotes, such as an elderly woman disenfranchised by voter ID laws and an undocumented immigrant's fight for legal status, but focus gets lost as 21 chapters race to cram in examples of how the Constitution impacts contemporary America in matter ranging from gerrymandering to farm subsidies. Shwed's crisp layouts and cute character design manage to make the information overload more digestible, while Gerardo Alba's red-white-and-blue color palette provides even the driest topics some pop. The Levinsons can be credited with a mountain of research and noble aims. But while it may appeal to students eager to avoid a standard textbook slog, the combination of dense text and rambling focus proves less accessible than the comics treatment promises. All the elements for a timely resource are here, but the result feels a touch underbaked.