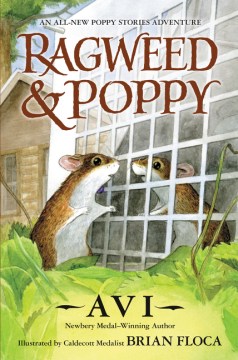 Gr. 4^-6. "A mouse has to do what a mouse has to do," states young Ragweed, leaving his family to see more of the world. We first met Ragweed, albeit extremely briefly, in Poppy (a Booklist Editors' Choice 1995), in which he is snatched up and eaten by the terrifying owl, Mr. Ocax. Here, we learn what a stalwart mouse Ragweed is as he hops a freight train, lands in the rundown town of Amperville, and barely escapes the clutches of Silversides, a very angry white cat, the founder of F.E.A.R. (Felines Enraged about Rodents). Ragweed takes up with hipster mice band members Clutch, Dipstick, and Lugnut. "You cool enough to hang with me, dude?" asks Clutch. When Silversides and her sidekick, Graybar, destroy the Cheese Squeeze Club, killing many mice, Ragweed not only leads the town mice to transform an abandoned bookstore into the cool CafeIndependent but also directs the battle against the opening night invasion by F.E.A.R. And like an old-time hero, Ragweed rides off into the sunset--aboard another freight train. Fans of Poppy and Poppy and Rye (1998) will relish the humor and the adventure, but they also may be glad they didn't know Ragweed so well before he was offed in the first story. ((Reviewed May 15, 1999)) Copyright 2000 Booklist Reviews

Ragweed, a golden mouse, is riding the rails when Lotar, a frightened little raccoon, climbs into his boxcar. Tough-talking but soft-hearted, Ragweed helps reunite Lotar with his mother and then sets off happily on his own. Near a "human house," he hears a cry for help and finds Poppy, a deer mouse, caught in a metal box trap. After he leaves to seek help from her family, a girl finds Poppy and decides to keep her as a pet. In the story's climax, Ragweed, Poppy and her family, Lotar and his mother, the child and her parents, three men, and an excitable dog converge for an amusing, chaotic scene. Avi handles the large cast of familiar and new characters with ease, while pacing the narrative for maximum enjoyment. Floca's pencil drawings illustrate the story. In telling how Ragweed and Poppy become friends, this seventh volume in the Tales of Dimwood Forest series serves as a bridge between Ragweed (1999), a prequel, and Poppy (1995), the first-published book in the series. A must-read choice for Poppy fans. Grades 3-5. Copyright 2020 Booklist Reviews.

Consummate storyteller Avi outdoes himself in this prequel to Poppy and Poppy and Rye, cutting loose with a crackerjack tale that's pure delight from start to finish. Here Ragweed, the adventurous mouse with whom Poppy is destined for a tragic romance, hops a train and heads for the bright lights of the big city. The hip urban setting hops with adventure and memorable characters, from the punk-haired mouse Clutch, who plays lead guitar for the Be-Flat Tires at the Cheese Squeeze Club, to Silversides, the malevolent puss president of F.E.A.R. ("Felines Enraged About Rodents"). Ragweed is wowed by the excitement of Amperville, with its abundance of "human nests," and quickly evolves from bumpkin to city slicker, picking up the lingo and mastering the "high four" paw slap. But cat-mouse hostilities escalate, with the cats destroying the Cheese Squeeze Club (the mice set up a new hang-out in an abandoned building once known as The Last Independent Bookstore). Ragweed rallies his fellow mice to lead a revolt against F.E.A.R. in a triumphant ending that finds the cats literally all washed up. Fueled with a mixture of outrageous puns and sly witticisms, this is, as Clutch would say, one totally awesome tale. High four! Final art not seen by PW. Ages 8-12. (May) Copyright 1999 Publishers Weekly Reviews