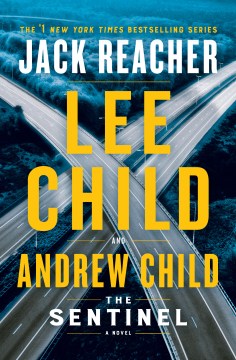 *Starred Review* If we assume the Jack Reacher novels follow a strictly accurate chronology, then the former military cop turns 60 this year. His creator, Lee Child, turns 66, which may help to explain why Child has enlisted his younger brother, novelist Andrew Grant, as his coauthor and eventual inheritor of the Reacher series: Lee Child (real name: James Grant) wants to retire. But he doesn't want Jack to retire. The Sentinel is the first novel credited to Child and Grant, and—prepare to let out a big breath—it's terrific. Sure, the writing style is ever-so-slightly different (Child's writing is terser than Child and Grant's), but the story is just as powerful. A man is wrongly accused of setting in motion events that proved catastrophic to a Tennessee town; a group of villains are intensely interested in getting their hands on the man, although their reasons are vaguely defined at the outset. Reacher wanders into the middle of it all and winds up risking his life to save another's. Brutal action mixes with keen-eyed detective work as Reacher metes out his own brand of justice. It's always a risk when someone who has written a series since its beginning turns over the reins to a new writer, but if this novel is a harbinger of what's to come, then Jack is in good hands.HIGH-DEMAND BACKSTORY: Jack Reacher fans' concern about Lee Child's decision to bow out of the series proves unwarranted in this terrific first Reacher novel coauthored by both Child and his brother, Andrew Grant. Copyright 2020 Booklist Reviews.

As well you know, Lee Child has announced that he will relinquish his celebrated "Jack Reacher" series to brother Andrew Grant (e.g., ), who will go by the pen name Andrew Child. They'll write the next few titles together before Andrew leaps wholly into the fray.

Jack Reacher returns in the 25th book in the series (after ). The big franchise news is that Child and his brother, thriller writer Andrew Grant (), will cowrite several Reacher novels before Child hands over the reins to his brother, who also inherits the "Child" name. In this first collaboration, Reacher stops in Nashville, where he quickly "adjudicates" a dispute between a local band and a club owner. Then he heads out of town and straight into more trouble in a small burg 75 miles south of Nashville. The town's computer systems have been hacked and ransomed, and everyone blames Rusty Rutherford, the town's IT person. Rusty meets Reacher when Reacher saves him from an attempted kidnapping. He stays on to help Rusty untangle the motivations of his would-be abductors. Reacher encounters cops good and bad, Russian thugs, a mysterious millionaire, fierce women, and lots of people he just has to beat up. Longtime fans will be satisfied with this straightforward adventure filled with familiar Reacherisms and more depth. He even acquires a cell phone, briefly. Those who enjoy Grant's "David Trevellyan" series will also enjoy this book. It's fun—but also difficult—to try to discern which brother wrote what.

Ironically, it took an English author to realize the dramatic possibilities of modernizing the wandering gunfighter of American frontier stories. Starting in 1997 with , Lee Child introduced Jack Reacher, a former military policeman with a fascination for blues music and prime numbers, a Luddite with a highly developed limbic brain and a compulsion to wander the United States, walking, hitchhiking, or traveling by bus, carrying only cash, a toothbrush, and his passport. He doesn't look for trouble, but he certainly doesn't walk away from it. And one more distinctive element: his appearance. "He was six feet five. 250 pounds. His hair was a disheveled mess. He was unshaved. Children had been known to run screaming at the sight of him."

Most of the Reacher books have been #1 bestsellers. What makes this new Reacher novel (the 25th) a special publishing event is that the series now has a cowriter, Andrew Child, who also writes as Andrew Grant () and is Lee Child's younger brother. Booksellers and Reacher fans might wonder if anything has changed. A line from will reassure them that nothing has changed. "Someone had sent six guys after . It would be wrong to let the day end with only two of them in the hospital." This time, Reacher arrives in a town near Nashville, where he heads toward one of his favorite destinations, a coffee shop, only to notice that someone is about to be abducted. Reacher being Reacher, he saves the stranger and ends up confronting a conspiracy involving cyber ransom, election sabotage, a Cold War secret, and... enough to say that plenty is happening.

Much of is humorous as Reacher patiently teaches bad guys about the flaws in their tactics. While there's lots of action, the novel also feels like a procedural as Reacher interviews suspects and delves deeper toward the truth. On occasion, almost subliminal references to Reacher's background, especially his mother's harsh childhood in France during WWII, suggest a motive for his increasing anger toward the people he's hunting. In the last 50 pages, that anger intensifies, with Reacher battling numerous enemies in the many levels of an underground complex—one of the most inventive action sequences in recent memory.

Apart from some timely plot elements (the title refers to a software program designed to prevent election fraud, for example), this new Reacher novel could have been published earlier. It continues the series without any sense that there's now a coauthor. In a year of drastic change, fans will welcome the consistency.

David Morrell is the bestselling author of First Blood and Murder as a Fine Art.