Apple : skin to the core : a memoir in words and pictures / Eric Gansworth. 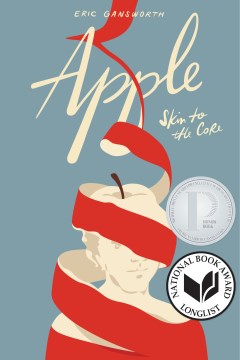 *Starred Review* Gansworth (If I Ever Get Out of Here, 2013), a tribally enrolled Onodaga living among the Tuscarora, offers a memoir in verse and lyric prose. Playing off the derogatory term apple (red on the outside; white on the inside), often used in Native communities, he explores the realities of growing up on the rez, being subjected to racism and poverty, and learning to navigate the white world. In ambitious thematic sections recalling Beatles albums (e.g., The White Album here becomes The Red Album, Abbey Road morphs into Dog Street), poems recount his grandparents' experiences in residential schools; his lifelong love of the Beatles and superhero comics; family influences, including his largely absent father; and his strong sense of Indigenous identity that survives despite leaving the rez. Several poems parallel Beatles' lyrics (Come Together and Here Comes the Sun); some push back against stereotypes (If you excel, you will be 'remarkable for being an Indian'); and still others point to the dangers of browsing with too much melanin. Gansworth's art, a mix of gouache paintings, photographs, and collages (reproduced in black and white), is interspersed throughout, adding interest and detail. With language rich in metaphor, this is a timely and important work that begs for multiple readings. Grades 10-12. Copyright 2020 Booklist Reviews.

Gansworth, an enrolled member of the Onondaga Nation, grew up on the Tuscarora reservation, making him always "the outsider inside." The theme of being an outsider appears frequently in this memoir in verse. So does the complicated legacy of Indian boarding schools, which three of his grandparents attended, and the slur "Apple," meaning "red on the outside, white on the inside" (based in assumptions that the author challenges). Gansworth's first-person narrative tells a deeply personal story, full of family history and references to popular culture. As in his novel If I Ever Get Out of Here (rev. 9/13), the music of the Beatles is central, with section titles alluding to the band's history and Abbey Road songs providing poem titles within one section. The full pages of mostly long-lined, sometimes dense verse (including some prose poems) are occasionally relieved by Gansworth's gouache illustrations, featuring a complex interplay of images from popular culture and traditional wampum belts documenting and celebrating "survival and cultural continuity," and by photographs gathered from various sources. This introspective memoir confirms by its very existence that, though the boarding schools tried to erase Indian culture, Native peoples "are still / here, / still standing, still walking, one resilient step at a time." Back matter includes further information about the author's poetry and art and explains musical connections. Dean Schneider November/December 2020 p.124 Copyright 2020 Horn Book Magazine Reviews.

Originally conceived as a series of paintings, this ambitious memoir in verse by Gansworth (), an enrolled member of the Onondaga Nation, explores intersectional identities alongside matters of generational and personal experience, erasure, and memory: "So much of my culture feels on the verge of vanishing. I wonder what part of that I'm contributing to with my own lack of knowledge." Gansworth first describes his family's history, beginning with his grandfather's time in Native American boarding schools, where "you are being taught systematically to forget so that you will have nothing left to pass on to your children." Subsequent sections detail variations on feeling like an outsider: Onondaga Gansworth's childhood on a Tuscarora reservation, the way his early interest in art and pop culture (Batman, the Beatles) made him stand out among his peers, and his adulthood as a gay man after leaving the reservation. Phrases and concepts circle and repeat throughout—"apple," for example, appears both as a pejorative ("red on the outside, white on the inside") and in reference to the Beatles' Apple Records, after which the work is structured—creating a raw, layered story about love and loss of community, culture, and place. Family photos, black-and-white reproductions of the author's paintings, and project "liner notes" round out the telling.¦