Sia Martinez and the moonlit beginning of everything / by Raquel Vasquez Gilliland. 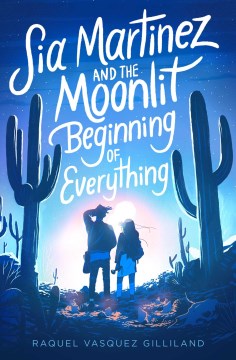 In her debut novel, poet Gilliland tells a totally genre-bent story about a mother crash-landing an alien spacecraft in the desert in a desperate attempt to reunite with her daughter. For about the first half of the book, Sia is a meditative analysis of the life of a Latinx teenager whose mother was deported by ICE and then lost to the desert, who has PTSD from sexual assault, and who lives in a town where she deals with racism on the regular. But then she finds her mother in a spacecraft and the story expands even more, with tales of abducted immigrants being used for a government-sponsored alien technology program. It's an unexpected, wild ride, combining sf with Latinx mysticism, and, at first, the mix is a bit jarring. But the memorable story, told in short, episodic chapters, features a diverse cast of well-rounded characters with plenty of depth. Amid the surprising plot twists is a thoughtful exploration of humanity, emphasizing that, though no one is perfect, no one is beyond redemption, either. Grades 9-12. Copyright 2020 Booklist Reviews.

Two years ago, seventeen-year-old Sia Martinez's mother perished in the Sonoran Desert, attempting to return home to (fictional) Caraway, Arizona, after being cruelly deported to Mexico. Sia's loving father and her loyal best friend, Rose, help support her through grief, even as the sadistic sheriff's son torments her at school (to his detriment; Sia is no slouch in the self-defense department). When a handsome new guy shows up and starts flirting, Sia is cautiously intrigued. Rose is suspicious (it has to do with the sheriff), but she's distracted by her own love interest, causing jealous Sia to ignore the warning signs. The first quarter of the book is realistic and engaging contemporary YA -- and then Something Happens, and we're launched into sci-fi. Very short chapters -- there are 224 of them -- keep the pace snappy, and a cliffhanger ending, plus deliberate loose ends, point to more adventures to come. There's a content warning at the start ("Sexual Assault, PTSD, Physical Abuse, Parental Death, Racist Violence"), and those issues are addressed head-on. Through Sia's wry first-person narration, however, the tone remains mostly light: "Aliens, government conspiracies, secret experiments. That's all unbelievable enough as it is. No need to add meddling dead abuelas to the mix." Elissa Gershowitz January/February 2021 p.103 Copyright 2021 Horn Book Magazine Reviews.

Every new moon, Artemisia "Sia" Martinez drives into the desert to light candles for her mother, who went missing after being deported three years ago by a racist sheriff. The 17-year-old's park ranger father, Haitian American best friend, and late abuela's spirit are lifelines in her small, predominantly white Arizona town. After a new boy arrives at her school, a series of strange events slowly unfolds alongside a sweet, sex-positive romance. Blue lights appear in the night sky, a silver-haired woman shows up in the town diner, and Sia's very-much-alive mother crash-lands before her in a spaceship. Sia must learn how to protect herself and her loved ones within a hostile system, from the likes of secret government agents and a bigoted gas station attendant. Gilliland, making her YA debut, uses lyrical prose to weave between contemporary themes of grief, sexual assault, and racial trauma; magical realism elements grounded in Mexican American culture; and a sci-fi adventure based on real issues surrounding government control over marginalized, undocumented bodies. Despite its leisurely pace, this is a genre-defyingread that is certain to keep readers engaged. Ages 12–up. Agent: Elizabeth Bewley, Sterling Lord Literistic. (Aug.)