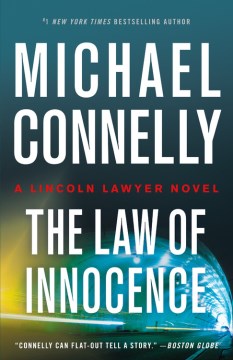 *Starred Review* Connelly's first Mickey Haller novel since The Gods of Guilt (2013) finds the brash defense attorney arrested for murder and forced to mount a defense from inside his jail cell. Haller landed in this world-class pickle after he was stopped by a possibly crooked cop, and a body was found in the trunk of his car. A frame, obviously, but who's behind it and why? Haller assembles his team, including his half-brother Harry Bosch, and attempts to formulate a counterattack. The rub, however, is that a not-guilty verdict won't be enough to restore Haller's reputation in the legal world. To prove true innocence, Haller explains, the guilty man must be found and exposed to world. In his Haller novels, Connelly has always displayed great ability to write courtroom scenes, combining thrust-and-parry exchanges between defense and prosecution with a look at the personal motives driving all the players (including the judge). He does all that here, too, but the extended focus on the pretrial discovery process, with Bosch and investigator Cisco Wojciechowski doing the legwork while Haller sits in jail, gives the novel a double-barreled appeal. This is a fine legal thriller and a revealing character study, as we watch Haller lose a little bluster at the prospect of life behind bars; there's also the matter of a strange virus in Wuhan, China, just starting to make headlines as Haller's case goes to trial. HIGH-DEMAND BACKSTORY: If you're a handicapper who pays attention to past-performance charts, a new Connelly novel means bet the farm. Copyright 2020 Booklist Reviews.

When police find the body of a client in the trunk of defense attorney Mickey Haller's Lincoln, Mickey knows he's been framed. Now he's coordinating his defense from a jail cell in the Twin Towers Correctional Center in Los Angeles, all the while watching his back. With a 750,000-copy first printing.

The stakes have never been higher for "Lincoln Lawyer" Mickey Haller when he is accused of murdering a former client. Smelling a setup, he and his law team, who may be the only people in the LA area who believe he's innocent, try to find the real killer. The prosecutor of his case makes sure bail is denied, which keeps him behind bars and the defense at a huge disadvantage. With his iconic detailed, no-nonsense, and meticulous narrative, Connelly brilliantly instructs the audience step by step how to build a defense while showing a very vulnerable side of Mickey. At the same time, he gives readers a gritty, realistic look at life behind bars, some very memorable quotes, and a cleverly injected take on current events. A tour de force in both crime and court fiction, Connelly () delivers what may be his best piece of legal fiction yet with this latest "Lincoln Lawyer" title (after 2013's ) and a star-studded cast of incredible supporting characters, including two ex-wives, his half-brother Harry Bosch, and a prosecutor that fans will not cozy up to. Fans and those living under a rock who have not experienced this master storyteller will find this edge-of-your-seat read absolutely impossible to put down.