The book collectors : a band of Syrian rebels and the stories that carried them through a war / Delphine Minoui ; translated from the French by Lara Vergnaud. 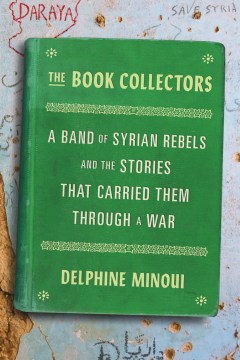 *Starred Review* Heartbreaking and heartwarming, this account tells how the pro-democracy rebels of Daraya, Syria, survived a six-year siege with the help of books. In 2015, journalist Minoui saw a picture on Facebook showing the young men of Daraya, which had been besieged by Bashar al-Assad's forces since 2011, in a windowless room surrounded by books. When Minoui connects with Ahmad Muaddamari via social media, he tells her how he and his friends have salvaged 6,000 books from a destroyed house and set up a library in the basement of a ruined building for the remaining townspeople. The library is used constantly as the people cling to books as if to life, and they discover that words have power to soothe the mental wounds of war and hardship. After the town is attacked with sarin gas and then firebombed, the residents are forced to flee, and Minoui finally meets Ahmad in person when he finds refuge in Turkey. Readers will be moved by the plight of the people of Daraya, and inspired by their faith in the power of books to give information, release, and hope. Highly recommended for all libraries and book lovers. Copyright 2020 Booklist Reviews.

In the ancient Syrian city of Daraya, under siege for years and eventually subject to forced displacement, residents discovered a motherlode of books and began to collect more. Within a month, 15,000 volumes were housed in a secret library used for discussion. In 2015, award-winning French-Iranian journalist Minoui learned of the library and interviewed one of the founders over WhatsApp and Facebook. With a 50,000-copy first printing.

During the early years of the ongoing Syrian civil war, in the town of Daraya, southwest of the capital of Damascus, civilians were subjected to a ruthless siege by government forces and affiliated militias. Despite this devastation, a few dozen people created an oasis of peace by forming an underground library, salvaging thousands of books from the ruins of their beloved community. In 2015, French Iranian journalist Minoui () discovered the library via Facebook and interviewed the activist librarians, following their activities on social media from her headquarters in Istanbul, then traveling to Beirut, Lebanon, and close to the Syrian borders to meet some of these book collectors. The group is depicted as part of a moderate, pacifist civil disobedience opposition, whose mission is a movement toward individual freedom by keeping dreams alive through books that take them beyond the misery of their besieged town. This compassionate portrayal of an engaging group of rebels serves as a testament to both the resilience of the human spirit and to the power of story. Highly recommended for those interested in current events, Middle East history and politics, and personal accounts of war. [See "Turn the Page," p. 18.]

French-Iranian journalist Minoui () paints a haunting portrait of the 2012–2016 siege of Daraya, a suburb of Damascus, during the Syrian civil war. After a government bombing campaign in response to pro-democracy protests set off an exodus from Daraya, remaining resistance members collected thousands of books and built a library in the basement of an abandoned building. Through video interviews and online chats with the library's founder, Ahmad Muaddamani, and frequent patrons, including a photographer, a Free Syrian Army fighter, and a veteran of previous protest movements, Minoui chronicles how these men—denounced as jihadists by president Bashar al-Assad—created a sanctuary for free thought. Her subjects describe how books as varied as the poetry of Mahmoud Darwish, Stephen R. Covey's , and Mustafa Khalifa's novel offer the library's patrons education, encouragement, and the "freedom they've been deprived of." Minoui also recounts her own responses to terrorist attacks in France to affirm how, amid the fight for survival, books can offer enlightenment and escape. Fluidly translated and emotionally powerful, this devastating account pays tribute to the "dream of a better world that never fully came true."