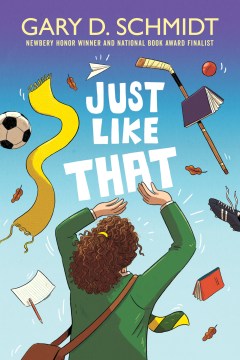 *Starred Review* It's the summer of 1968. The accidental death of a dear friend has blindsided Meryl Lee, and grief still overwhelms her at times. Unable to face her old school for eighth grade, she enrolls at St. Elene's Preparatory Academy in Maine, where she initially feels isolated from her pretentious roommate and other classmates. From the start, she's intrigued by the strong, enigmatic headmistress, Dr. MacKnockater, who seems to understand so much and whose opening address unexpectedly mesmerizes and challenges Meryl Lee. Slowly, she begins to find her way and tentatively makes friends while navigating boarding-school life under the watchful eyes of her inscrutable teachers. Meanwhile, Matt has arrived in the area. A good-hearted, vulnerable boy on the run from his sometimes-violent past, he's befriended by Dr. MacKnockater, who takes him in and gradually gains his trust. The Vietnam War isn't just the story's backdrop, but an inescapable, unsettling element of the times, painfully affecting several characters. The well-phrased writing is understated, endlessly engaging, and sometimes suspenseful or amusing. While fans of Schmidt's The Wednesday Wars (2007) and Lizzie Bright and the Buckminster Boy (2004) will find links to both stories here, this well-constructed novel, with its beautifully interwoven strands of narrative, stands on its own. An unforgettable story of loss, healing, and finding one's way. Grades 6-8. Copyright 2020 Booklist Reviews.

Losses suffered by two young people set in motion threads of fate that will ultimately tie them together. In June 1968, in Hicksville, Long Island, Meryl Lee Kowalski's closest friend, Holling (protagonist of The Wednesday Wars, rev. 7/07), is killed in a car crash, and her parents send her away for a fresh start at St. Elene's Preparatory Academy for Girls on the coast of Maine. In a parallel narrative, Matt Coffin has fled New York City with a pillowcase full of money stolen from Leonidas Shug, an evil, Fagin-like leader of a gang of street criminals who killed Matt's friend. After the loss of her friend, Meryl Lee feels that "everything in the world became a Blank," a dark hole that threatens to suck her in. In the same town, Matt has holed up in a lobsterman's shack, but he realizes that he cannot escape his past, as Shug is in pursuit, leaving a trail of arson and mayhem in his wake. Meryl Lee's and Matt's stories eventually converge through the actions of St. Elene's wise and compassionate headmistress, who offers them both the refuge they seek. Schmidt nimbly weaves a story of good and evil, loss and gain, home and heart. He writes like a modern-day Dickens; at one point, Meryl Lee says that "there are times when words can't do what you want them to do," but Schmidt can, and this is a masterwork of old-fashioned storytelling. Dean Schneider January/February 2021 p.116 Copyright 2021 Horn Book Magazine Reviews.

In 1968, the summer before her eighth grade year, Meryl Lee Kowalski's best friend dies suddenly, and Meryl Lee becomes enveloped in grief and depression—which she calls "the Blank"—on Long Island. To give her a new start, her parents enroll her in a girls' prep school on the coast of Maine; the headmistress, Dr. MacKnockater, promises to help Meryl Lee become "accomplished." As the school year progresses and she fends off the encroaching Blank, Meryl Lee also faces classist teachers and snobby classmates while discovering a social conscience around the treatment of the school's kitchen staff. A secondary arc follows Matt Coffin, whom Dr. MacKnockater finds living in an oceanside shack and whose dark past is never far behind. The heaviness of Matt's story line at times eclipses Meryl Lee's, but episodes of slapstick humor, told in Schmidt's () trademark wry deadpan, are woven throughout (a disastrous formal luncheon hosting Vice-President Spiro Agnew is a standout). Though overlong and occasionally plodding, Schmidt's rich, humane tale rewards persistent readers with moments of hilarity and heartache in a skillfully rendered Vietnam War–era boarding school setting. Ages 10–up.