My life as a villainess : essays / Laura Lippman. 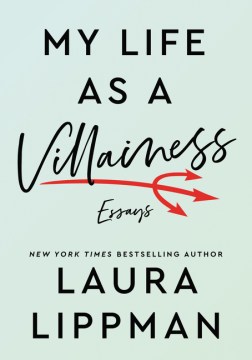 For all of Lippman's success as a best-selling novelist and crime writer, she examines her life in pithy personal essays with a strong shot of ruefulness and not a shred of self-congratulation. In her first nonfiction title, she is confiding, sharply funny, and disarmingly candid about both her struggles and her privilege. Reflecting on age and womanhood, she champions stubborn self-acceptance, even self-love; she tells hilarious tales about being a bad friend, an older mom, and a single parent since her famous screenwriter husband is so often away. In the title essay, Lippman takes measure of professional battles, how she ended her first marriage, and how she "can live inside the skull" of all kinds of villains. Lippman portrays her younger self and her parents—her children's librarian mom, her newspaper columnist father—vibrantly recounts her first newspaper job in Waco, Texas, and defends social media. She revels in confession and connection, surprise and provocation, and she performs all with panache, wisdom, wit, and courage. Lippman asserts: "I'm a tough old bird," and readers will declare: and one helluva true-tale teller. Copyright 2020 Booklist Reviews.

Beloved crime fiction writer and avid tweetmeister Lippman makes an unconvincing case for her villainy in this collection. The essays, some new, some previously published, are overall a delight. She opens strong with "The Whole 60," in which she revels in her power and glory as she hits a milestone birthday. Following pieces meander through her life and times: her first career, as a journalist in Texas and in her hometown of Baltimore; an unsuccessful first marriage; a second successful marriage and motherhood at fiftysomething; ruminations on family and friends; her tendency to let down friends (readers may not be wholly convinced that she is "a shitty friend"); that time she was called in to the principal's office for subtweeting about mean girls who made her daughter miserable. In the final piece, "Men Explain to Me," Lippman deftly skewers the male fans of her husband David Simon's revered Baltimore-based TV show. A piece about how she helped Simon make friends with the late TV personality/chef Anthony Bourdain is moving and humorous as well. Fans of Lippman's novels () and her Twitter followers will gobble up this short collection and beg for more nonfiction from this gifted storyteller. [See Prepub Alert, 11/11/19.]

Self-awareness, a knack for observation, and a dose of snark fuel the uneven but occasionally potent debut collection from Edgar Award–winning crime novelist Lippman (). As Lippman explains, "There is a sense of liberation in admitting to one's faults" and in fact she "had to stretch to earn the title" of villainess. The essays sometimes feel as though they could have gone deeper into their subject, but nuggets of insight show up consistently enough to compensate, as when she comments, "Our culture long ago made peace with the fragility of matrimony, but we still have high expectations for friendships." Lippman is at her best when confronting society's expectations of women, especially while discussing becoming a late-in-life mom. About menopause, she drily comments that it "doesn't make women want to die. It makes other people wish we would die, or at least disappear." Rightfully asking to be judged on her own terms, not on those of the women she cites as inevitable comparisons for a female essayist—Joan Didion, Nora Ephron, Susan Sontag—Lippman contributes an appealingly candid voice to the literary conversation. Agent: Vicky Bijur, Vicky Bijur Literary. (May)