Just as I am : a memoir / Cicely Tyson ; with Michelle Burford ; foreword by Viola Davis. 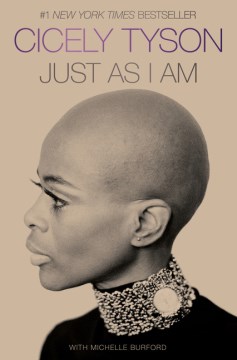 *Starred Review* Cicely Tyson is a living treasure; at 96, she remains passionately outspoken about national affairs, politics, and the entertainment world. Her enthusiasm, intelligence, and wit sparkle across the pages of this engaging and lively memoir. Born in 1924 to Caribbean immigrants, Tyson rose above an imprudent early marriage to become a hardworking single mother. Spotted in a crowd and encouraged to try modeling, she poured her trademark energy and work ethic into this new career, eventually becoming an actor. Along the way, she befriended a who's who of Black talent: Sidney Poitier, Diahann Carroll, Ruby Dee, Ossie Davis, Maya Angelou, and, most notably, Miles Davis, with whom she had a tempestuous and ultimately tragic on-again, off-again marriage. With steely determination and confidence, she pioneered in notable television roles, defied beauty standards by wearing her natural hair, and fought for meaty parts she was deemed "too sexy" to play. Undaunted by racism and sexism, Tyson triumphed in such iconic roles as Rebecca in Sounder, and the lead in The Autobiography of Miss Jane Pittman, confounding Hollywood stereotypes about the abilities and appeal of Black women. Whether discussing the politics of natural hair or the racial violence that led to the Black Lives Matter movement, Tyson speaks with incisive clarity, humor, and moral authority.Women in Focus: The 19th in 2020HIGH-DEMAND BACKSTORY: After six decades of exceptional accomplishments, Tyson's first book will garner ardent attention. Copyright 2020 Booklist Reviews.

Author of the best-selling , about parenting terminally ill son Ronan, Black uses to reconsider the concept of resilience, for which she was roundly praised when she rebuilt her life—another husband, another child, a booming career—after Ronan died. In , celebrated actor Byrne recalls his formative first 12 years in a large Dublin family, interspersed with career highlights from acting opposite Richard Burton to winning a Golden Globe. As related in , Cowan learned after her mother died that she had been raised in London's Foundling Hospital, a brutal institution that originated solitary confinement even as it helped create important cultural institutions (40,000-copy first printing). Abandoned young by his eccentric poet father and adopted by his stepfather, David Gilmour of Pink Floyd, Gilmour bonded with a magpie he rescued (named Benzene for its glistening black feathers). With , he relates his subsequent immersion in a poem his biological father wrote about effecting a similar rescue and explains what Benzene taught him about parenting (60,000-copy first printing). In , award-winning journalist Padnos relates what it's like to be kidnapped and tortured in Syria by Al-Qaeda for two years; originally scheduled for July 2020. In , Whiting Award winner Owusu limns a crisscrossed coming-of-age (she moved from Rome and London to Dar-es-Salaam, Kampala, and finally the United States for college) and subsequent assured sense of self; originally scheduled for May 2020. Fashion and beauty editor at Vibe, then Rolling Stone, the high-powered Smith collapsed in tears one day and, as explains, completely remade her life (75,000-copy first printing). Tichenor's explains that as a young Episcopal priest, she had to learn how to integrate into her vocation twin tragedies: the death of her five-week-old son less than a year after her alcoholic mother's suicide. Tony Award winner, three-time Emmy Award winner, the first black woman to win an honorary Oscar, and the first black woman to host Saturday : Tyson has some story to tell in .

In this memoir, actress Tyson () recounts her childhood in a family she experienced as simultaneously loving and abusive; reflects on her decades-long, multiple-award-winning career on stage and screen; and shares her philosophies on life, acting, health, and faith. Among other distinctions, Tyson was a pioneer in the natural hair movement, as the first actress to wear her hair natural on television. She emphasizes her belief in Black excellence, relating stories of people working hard to better their lives and those of their family members. Tyson herself dedicated her career early on to positive portrayals of Black people, especially Black women, recognizing that there were few such portrayals when her career began. She ties her experiences as a Black woman to issues of systemic racism and generational trauma, and to recent police killings of Black people. Tyson's longtime partner Miles Davis features heavily in her reminiscences. Some readers will be distressed by depictions of children's corporal punishment and by repeated use of a slur for disability and disabled people. Recommend to readers who enjoy engaging and sassy memoirs, and those interested in learning about 20th-century Black theater, film, and television.

In her spirited debut memoir, actor Tyson recalls her extraordinary life, as well as the racial and gender stereotyping, movie-business prejudice, and ill-behaved men that shaped her seven-decade career. Tyson highlights her lifelong penchant for rebelling against convention and injustice, from speaking up against her straitlaced West Indian mother and her abandonment of an early marriage (an ordeal of "tedium and regret") to fighting off an attempted sexual assault by acting teacher Paul Mann. She also discusses the importance of pushing back against excessive workplace demands. ("When the show's director would not grant me the time off, I took it anyway.") The memoir dives deep into Tyson's reflections on how her performances affected audiences and fans, noting how "deeply satisfying" it was to hear from "those who approached me, tears in their eyes, to say how had touched them." She also provides an intimate glimpse into her stormy marriage to jazz maestro Miles Davis, which ended in divorce. ("I felt no need to drape words on the hanger of inevitability. The marriage had long since been over.") It's in these poignant moments that the memoir becomes a resonant meditation on the link between an actress's life and her art. This showstopping tale hits the mark.