The way back / Gavriel Savit. 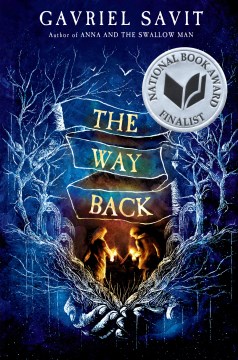 *Starred Review* The story begins in the year 1812 in a tiny shtetl called Tupik, but the delightfully twisted tale that follows is timeless. Rooted in Jewish folklore, it flirts with high fantasy as two young residents of Tupik—a girl named Bluma, who inadvertently comes to possess Death's instrument of destruction, and an incorrigible boy named Yehuda Leib—embark on a quixotic quest to defeat Death. It will take them into the dangerous Far Country, the domain of Death and seemingly countless demons, including, notably, Lord Mammon, who teaches Yehuda Leib the folly of striking a deal with a demon. While Yehuda Leib is desperately seeking to recover his dead father's soul, Bluma finds herself unwillingly in the company of Lilith and her Sisters of the Lileen. This is all serious stuff, but it's not without its occasional amusing quirks: Death suffering from a hangover, for example, or Yehuda Leib pushing Mammon in a perambulator. This work of prodigious imagination is especially notable in its author's uncanny ability to create a visceral suspense that captures readers' attention and won't let go as the pages fly by. The book is not perfectly seamless, but it has the integrity of a wholly created alternate world populated with invariably viable characters. Not quite an epic, this will nevertheless claim an enduring place on the fantasy shelf. Grades 9-12. Copyright 2020 Booklist Reviews.

In this dark fantasy set in a nineteenth-century shtetl in Eastern Europe, grieving teens Bluma (who's lost her grandmother) and Yehuda Leib (who found and lost his absent father in the same moment) travel to the Far Country and match wits with demons and other figures drawn from Jewish folklore, including the Angel of Death. Narrated with a storyteller's cadence ("And this is how it came to pass that there, beneath her bed, Bluma descended into the sleep of the grieving under the watchful gaze of her own unblinking eyes"), the winding tale is full of creepy characters and intriguing magical objects, as the protagonists are confronted with choices that force them to face mortality. Savit (Anna and the Swallow Man, rev. 1/16) crafts an absorbing fantasy and gives teens plenty to contemplate about life, love, storytelling, and family. Shoshana Flax September/October 2020 p.106 Copyright 2020 Horn Book Magazine Reviews.

At once historical and tenderly intimate in scope, Savit's () ambitious novel begins in the Eastern European shtetl of Tupnik in the 19th century, where the arrival of the Messenger of Death sets two Jewish youths on intersecting paths. The boy, Yehuda Leib, is desperate to recover a soul from Death; the girl, Bluma, eight days his junior, seeks to escape Death's angel after accidentally acquiring its instrument: a seemingly innocuous but powerful spoon. Both travel into the Far Country, a graveyard-adjacent realm inhabited by demons and the Army of the Dead, attracting the attention of powerful, corrupt demon nobles who see them as tools. Savit suffuses folklore and Jewish mysticism into a narrative tangle of chases and bargains, otherworldly horrors—a wheelchair woven of still-growing fingernails is particularly memorable—and delicate, compassionate moments, all studded with Yiddishisms. The duo's journey across the demonic demesnes and the mortal town of Zubinsk, where an open wedding invitation convenes both devout Hasidim and opportunistic entities, all looking to benefit from a holy presence, presents a bewitching allegorical adventure comprised of small, beautifully composed moments. Ages 12–up. Agent: Catherine Drayton, InkWell Management. (Sept.)