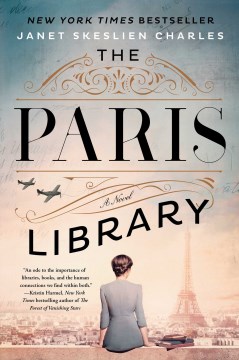 Odile Souchet lands her dream job at the American Library in Paris, much to the chagrin of her father, who thinks she should focus on finding a husband. But it is 1939, and soon she has bigger worries as Nazis occupy the city, and even the inimitable directress, Miss Reeder, cannot guarantee the safety of the library's books and patrons. Forty years later, in a small Montana town, Lily Jacobsen is curious about her quiet, elegant neighbor, and soon Odile Gustafson is giving her French lessons, and they're dreaming up their own library classification system. Chapters alternate between Odile in Paris, where readers get to know Boris, the Russian head librarian, eccentric patron Professor Cohen, and Odile's twin brother, Rémy, who enlists in the French army. In Montana, Lily relies on Odile for guidance through family and friend trouble, though she senses Odile is keeping a secret. Charles brings her experience working at the American Library in Paris to this novel inspired by real people, that is a love letter to Paris, the power of books, and the beauty of intergenerational friendship. Copyright 2020 Booklist Reviews.

It's 1939 when Odile gets her dream job as a librarian at the American Library in Paris. When the Nazis move in to occupy France, the library is allowed to stay open. Odile, along with a small band of librarians, patrons, and volunteers, form a secret resistance that includes hiding forbidden titles and delivering books to banished Jewish patrons. Despite the horrors of war, the library is the constant that keeps her going. In 1983 in a small Montana town, 12-year-old Lily uses a school report as an excuse to meet her mysterious French neighbor. The older woman helps Lily through her tumultuous teen years, offering books, advice, and refuge. In Charles's second novel (after ), Odile is a complex character, both brave and childish. She can be unforgiving and impetuous as she watches the war make good people do bad things. Through her interactions with Lily, her regrets and the one betrayal for which she cannot forgive herself are revealed. Plan for extra copies, as this tale has all the hallmarks of a book club pick. [See "Seasonal Selections," 2/20.]

Charles () delivers a delightful chronicle of a woman's life in WWII-era Paris and rural 1980s Montana. Shortly before the Germans invade France, Odile Souchet, a young Parisian who has adored the American Library in Paris since childhood lands a job there as a librarian. During the occupation, the library remains open and delivers books to soldiers. After Odile learns that her friend Margaret has become enamored with Felix, a Nazi soldier, she tells her fiancé, Paul, a policeman, of Margaret's folly, and is shocked when Paul beats Margaret, leading Odile to leave and volunteer at the American Hospital. Charles then skips forward to 1983 Froid, Mont., where seventh-grader Lily befriends her widowed neighbor Odile Gustafson, who teaches her French and reveals secrets about her life in Paris. Their bond strengthens throughout Lily's teenage years. Charles's richly detailed plot incorporates historical figures from the American Library and highlights the perils of occupied Paris. Historical fiction fans will be drawn to the realistic narrative and the bond of friendship forged between a widow and a lonely young girl.