In harm's way : the sinking of the USS Indianapolis and the extraordinary story of its survivors / Doug Stanton. 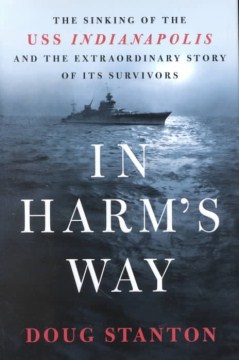 One of the more notorious snafus of World War II concerned the July 1945 sinking of the cruiser USS Indianapolis by a Japanese submarine, with the loss of almost 900 sailors. Richard Newcomb's Abandon Ship! (1958) successfully recounted the disaster, but Stanton's account isn't at all redundant. Superbly crafted, it benefits from sympathetic research on the Indianapolis survivors, the horror of their experiences, and their courage in surviving. After the 300 men who hadn't been blown up, burned, drowned, or devoured by sharks were rescued, it emerged that the disaster was exacerbated by the navy's having incompetently lost track of the Indianapolis, which delayed rescue. Yet only Indianapolis captain Charles McVay was punished, and his heroism after the sinking was officially ignored, albeit not by the men he encouraged to hang on during four days of drifting in the ocean and, for many, dying. That horrible ordeal Stanton renders vividly, thanks to the recollections of several living survivors and his evocative narrative style. Expect strong demand for this powerfully engaging book. ((Reviewed March 15, 2001)) Copyright 2001 Booklist Reviews

Has anyone not yet heard of the tragedy of the USS Indianapolis? Several books, many articles, a TV movie, and constant replays on the History Channel have been dedicated to this fiasco. Journalist Stanton has written a compelling, eminently readable account of the Indianapolis for the nonspecialist. Just before the end of the war, the heavy cruiser was sent from San Francisco to Tinian in great secrecy, carrying the atomic bomb. After delivering her cargo, the ship was ordered to the Philippines and torpedoed by a Japanese submarine on July 20, 1945. Because of a foul-up at naval headquarters, no one realized that the ship was overdue, and a search was not organized. Consequently, survivors of the torpedoing were in the water for several days, and 600 died from exposure and shark attacks. Finally, after five days, the navy sent out rescue vessels, and 318 were saved. The navy high command decided to save its reputation by scapegoating Capt. Charles Butler McVay. At his court-martial, the jury of admirals was instructed to find him guilty, a verdict surviving crew members tried to overturn for 50 years. Last year, the navy finally admitted that McVay was not in any way responsible for the loss of his ship, though sadly it was too late for McVay; he committed suicide 20 years after his court-martial. Richard Newcomb first revealed this story in his Abandon Ship! (1958), which has recently been reissued by Harpercollins with an update by Peter Maas. Newcomb's book is more scholarly, and he had access to many survivors then still living. His book's coverage of the new trial held in 2000 is also more thorough than Stanton's. Both books are worth purchasing and should be in every public and college library. Stanley Itkin, Hillside P.L., New Hyde Park, NY Copyright 2001 Cahners Business Information.

Given the stringent precision of the U.S. Navy and military during wartime, how could a WWII battleship carrying over 1,000 men be torpedoed by a Japanese submarine and sink, leaving the survivors to bob in the Pacific Ocean at the mercy of elements and predators, without anyone realizing the loss for more than four days? Stanton not only offers a well-researched chronicle of what is widely regarded as the worst naval disaster in U.S. history, but also vividly renders the combatants' hellish ordeal during the sinking, and the ensuing days at sea as well as attempts to cope with the traumatic aftermath. Stanton documents the facts of the case, embellishing his story with lurid details gleaned from interviews with survivors. Though the ship's captain would become the first and only in U.S. naval history to be court-martialed for the loss of his ship, Stanton offers a solid body of evidence to justify the survivors' partially successful efforts to exonerate him. Stanton's omniscient narrative shifts among the individual perspectives of several principal characters, a successful technique that contributes to the book's absorbing, novelistic feel. Readers, of course, must trust Stanton and his research in order to be truly consumed, but the authority of his voice should win over all but the most obsessive skeptics. Illuminating and emotional without being maudlin, Stanton's book helps explain what many have long considered an inexplicable catastrophe. (May 21) Forecast: Following on the heels of the bestselling Abandon Ship, recently resurrected by Peter Maas, this book is unlikely to be ignored. A $150,000 marketing campaign includes a nine-city author tour, national print advertising, and target marketing to the military and naval market. Copyright 2001 Cahners Business Information.

The tragic fate of the U.S.S. Indianapolis: the U.S. Navy's worst disaster at seaLech, Raymond B., 1940-

Indianapolis: the true story of the worst sea disaster in U.S. naval history and the fifty-year fight to exonerate an innocent manVincent, Lynn

Lost in Shangri-la: the epic true story of a World War II plane crash into the Stone AgeZuckoff, Mitchell

Eight survived: the harrowing story of the USS Flier and the only downed World War II submariners to survive and evade captureCampbell, Douglas A.
Fatal voyage: the sinking of the USS IndianapolisKurzman, Dan

The war below: the story of three submarines that battled JapanScott, James (James M.)

Escape from the deep: a legendary submarine and her courageous crewKershaw, Alex